Jazz at Berlin Philharmonic - The programme is the star

The 2400-seat main hall of the Berliner Philharmonie had completely sold out for the concert on May 6th 2015 with Michael Wollny, Markus Stockhausen and the 12 Cellists of the Berlin Philharmonic Orchestra. This was the ninth concert in the series 'Jazz at Berlin Philharmonic,' and it brought to a close the second season of the series curated by Siggi Loch. Many of these concerts – the others were held in the 1200-seat Kammermusiksaal – had sold out long in advance.

The concert series has been hailed as a unique phenomenon ever since its creation in December 2012. The formula which has made it so successful was fixed from the outset. Each of the concerts would be “an edition of one,” a special event never to be repeated. Four of these festive occasions have gone through to be released as CD's on the ACT label, with both “Leszek Możdżer & Friends” and “Accordion Night” imminent. It is also confirmed that the series will be continued into the 2015/6 season.

“In the Jazz at Berlin Philharmonic series,” explains its curator Siggi Loch, “the programme is the star.” The wide canvas offers the space to bring musicians together whose stellar talents would never have combined in other circumstances.
There is a back-story to the first concert in the series, on 11th December 2012. The Berlin Philharmonic Foundation had auctioned off the Steinway piano which Alfred Brendel used to play on when he appeared in Berlin. The successful bidder at that auction was Siggi Loch.
In discussions with Martin Hoffmann, the general manager of the Philharmonie, and its overall head of music Sir Simon Rattle, it was agreed that the Alfred Brendel piano would return to the Philharmonie for a final bow – and would be played on one evening by three of the finest jazz pianists in Europe.
The concert with Michael Wollny (from Germany), Leszek Możdżer (Poland) und Iiro Rantala (Finland) playing first one, then two and at the end three pianos, was an unmitigated success. The audience had taken the idea of this piano summit to its heart, as the jubilant applause which followed it testified. The Berlin paper Der Tagespiegel described an event with 'rarity value for Berlin,' with 'classical music and jazz looking each other in the eye.' The event was recorded and appeared shortly afterwards on CD: “Jazz at Berlin Philharmonic I” (ACT 9556-2).

It soon became evident that this one-off experiment could - and should - become a new series at the Philharmonie. Siggi Loch was to some extent following in the footsteps of the American jazz impresario Norman Granz (1918-2001). From 1944 onwards, Granz had pursued a particular vision with his successful international series Jazz at the Philharmonic. He had wanted to bring jazz out of clubs and place it in classical concert halls, and to make more people in society at large aware of the astonishing skill levels in jazz and of both its uniqueness and diversity. The American impresario had seen the value of bringing the great musicians of the day together, and instigating something fresh and new.
Granz's vision lives on seventy years later in “Jazz at Berlin Philharmonic II: Norwegian Woods” (ACT 9569-2), with vocalist Solveig Slettahjell, blues guitarist Knut Reiersrud, pianist Bugge Wesseltoft and “In The Country”, the band led by maverick pianist Morten Qvenild. This group, gathering together the stars of Norwegian jazz, as ever, pushed the boundaries between jazz, blues, soul, Norwegian folk songs and electronica.

The Polish pianist Leszek Możdżer has been performing in large classical music halls for some years. In his native country, his albums climb to the top of the pop charts. The German magazine “Fono Forum” wrote of him that he is “one of the rare jazz pianists who could probably made a career as an interpreter of the works of Debussy and Scriabin. The CD "Jazz at Berlin Philharmonic III “Leszek Możdżer & Friends” (ACT 9578-2) is the first – and highly successful – encounter of Możdżer and his trio with the Atom String Quartet. This first-rank chamber ensemble is virtually unknown outside Poland, and what emerges from their collaboration with Możdżer is big-boned, large-scale music which transcends categorization. Its coruscating shimmer gives it universal appeal, as the sustained and ecstatic reception which the audience in the hall gave it clearly testifies.

The most unfamiliar concept which has been tried in the series so far is to be heard on Jazz at Berlin Philharmonic IV “Accordion Night” (9589-2). This concert united musicians from no fewer than seven countries who are specialists on an instrument that has tended to play the role of outsider in jazz, but which is currently experiencing a renaissance, largely as a result of the French accordionist Vincent Peirani. He is to be heard here with his soul partner saxophonist Emile Parisien. These two artists are the dream pairing in European jazz right now. Another established duo is that of the Austrian accordionist Klaus Paier with the cellist Asja Valcic. They combine the accordion traditions of central Europe with influences from classical music and from tango.
Staying faithful to the motto “connecting the unexpected,” Siggi Loch instigated the formation of two new duos, which met for the first time in this series. The Norwegian Stian Carstensen is a complete master of every kind of music he turns his hand to. Here he encountered the Polish violin magician Adam Bałdych. And finally, Régis Gizavo met guitarist Nguyên Lê. Gizzavo is a rare species, the only one of the four accordionists to be self-taught. The others received a classical music education; he learnt his craft out on the streets of Madagascar.

The sustained and continuing success of Jazz at Berlin Philharmonic demonstrates that jazz, so often pronounced dead, can and will keep on coming up with the goods, if it is simply left to do it. The series puts jazz in its rightful place within the music of our time, music capable of absorbing and of transforming different genres and cultures. More than that, it reaches out directly to the hearts, minds and deepest emotions of a wide audience.

Jazz at Berlin Philharmonic – all albums 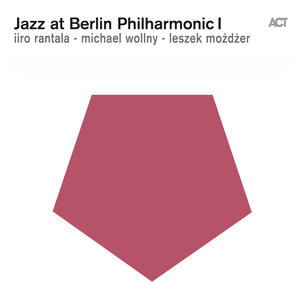 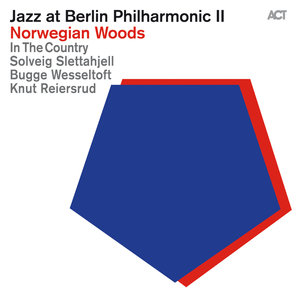 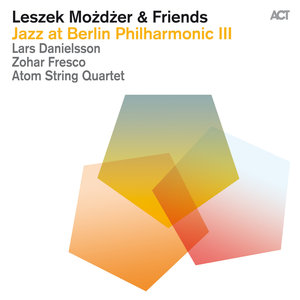 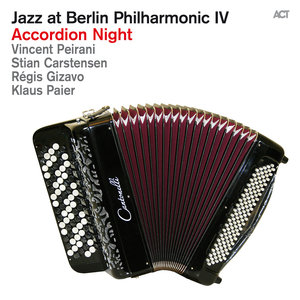