“Since 1992, ACT has been building its own European union of musicians, fostering a freedom of movement between nationalities and genres, and has given us an authentic impression of what the continent is about.” (The TIMES)

“One of today’s finest curators of progressive jazz and creative music.” (Downbeat)

“One of the most important European jazz labels, building bridges for individualists.” (Süddeutsche Zeitung)

Thirty years ago, music producer/publisher Siggi Loch moved on from his highly successful role as the European head of WEA (now Warner Music Europe) in order to fulfil a dream he had harboured since his youth, and set up his own independent jazz label, ACT. There have been more than 600 releases on the label since then; they stand as a testament not only to the power of his vision, but also as evidence of his inexhaustible drive and energy which has turned that dream into a reality. Today ACT is considered "one of the finest curators of progressive jazz and creative music.” (Downbeat), "inclusive, cosmopolitan and widely respected" (The Guardian).

Since 2015 Andreas Brandis has been steering the label's fortunes together with Siggi Loch, and has been a full partner in the business since 2022. The label’s most important endeavour, then as now, is to find and to develop new young artists who share a vision of jazz as an attitude which fosters openness, interaction and communication.

The label’s 30th anniversary is therefore to be marked by a special event, creatively combining a look back at the label's history and a gaze into its future. The celebration will take place live on two evenings, 10 and 11 November 2022 in the main hall of the Berlin Philharmonie, with ACT artists from three generations. In addition, a studio album "ACT30 - Nils Landgren & Three Generations" will be released on 28 October. 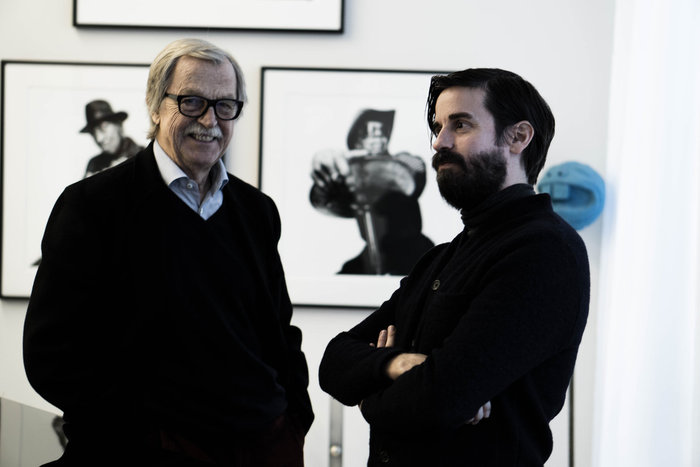 30 years of ACT: The freedom of the individual in a group of like-minded people

Thirty years might be a short time in the history of music - but a lot has happened in that time in the relatively young genre of jazz. During this period, ACT has played a significant and active role in determining and shaping the course of jazz music. Jazz, which originated in North America, has its own recognizable rhythms, harmonies and styles. Over the past few decades it has opened up more and more, and developed as a musical language. "Jazz is a Spirit": Abbey Lincoln's famous saying could also stand as a headline to describe the 30 years of the label’s history. With ACT, Siggi Loch created a context where encounters, connections and the crossing of borders could happen.
The very first international production "Jazzpaña", a mélange of jazz and flamenco, proved that this idea had real potential, not least through being nominated for a Grammy. It also opened the door for the first ACT exclusive artist and the longest-standing member of the ACT family: guitarist Nguyên Lê. His interpretation of the concept of jazz is unique and his alone, made up of influences from his French homeland, from his Vietnamese roots and from the jazz and rock of America.
Another milestone came with the jazz symphony "Europeana", a work which embodied a European perspective on jazz with borrowings from classical music and folklore. An approach that was also to become the trademark of jazz from Scandinavia, for which ACT is still an important taste-maker today and from which several success stories have emerged: e.s.t. Esbjörn Svensson Trio, Nils Landgren, Lars Danielsson, Viktoria Tolstoy and many more.
ACT was also an important part of the emancipation of jazz within Europe: the albums of the trio "Mare Nostrum" with Paolo Fresu, Richard Galliano and Jan Lundgren are considered classics today. Also to be singled out is the great Joachim Kühn’s nonchalant way of slipping through borders, or indeed the transcendently vivid imagination of Michael Wollny, capable of producing "world dreams". Meanwhile, Vincent Peirani and Emile Parisien are currently writing an important chapter in the rich history of jazz in France.

It should also be noted that jazz from outside the European continent has a firm place on ACT: whether it be from North Africa, as is the case with Nesrine or Majid Bekkas, or from Asia, as with Huong Thanh, Black String or Youn Sun Nah. In addition, groundbreaking albums by internationally established artists such as Vijay Iyer, Rudresh Mahanthappa, Julia Hülsmann, Leszek Możdżer, Bugge Wesseltoft and Vince Mendoza have also appeared on ACT. For the past ten years, Siggi Loch has been bringing artists from a wide range of genres to the big stage in the "Jazz at Berlin Philharmonic" series - a cooperation with the "Stiftung Berliner Philharmoniker. And many of these unique evenings have been released as albums on ACT. One key figures from the first edition on, for over ten years on the label, and a true original: the Finnish pianist Iiro Rantala, who manages to move in jazz, classical and pop with equal mastery, his is a virtuosity which listeners always relish.

In short, it seems as if jazz can succeed in an area where the wider world outside often manifestly fails: uniting peoples, cultures and generations in harmony, regardless of their differences and competing interests. Siggi Loch calls the core of his concept of jazz "the idea of the freedom of the individual in a group of like-minded people". The current generation of artists, in addition to some of those mentioned, also unmistakably brings this idea to life: Johanna Summer, Jakob Manz, Anna Gréta, Daniel García, Dearest Sister, Jazzrausch Bigband, Vincent Meissner, KUU!, Joel Lyssarides, Marius Neset, Diego Piñera, Andreas Schaerer, Shalosh and many more. Each brings her/his very own individual version of jazz.

Thirty years. It is a period in which the ways recorded music is disseminated and consumed have undergone a complete revolution, during which listening habits have changed radically. In 1992, the year ACT was founded, the CD was the unassailable No.1. medium for music. ACT albums have always had a strong visual concept, featuring works by visual artists. There has been a desire to make the look and the feel of the album completely transcend the idea of commodification or of a utilitarian object. In interaction with the music, the artwork and the design concept create an aesthetic of their own. And listeners worldwide feel a strong sense of connection. This deeply felt imperative has not changed or diminished one bit in the current, primarily digital, music world. It is only the distribution channels which have diversified. Andreas Brandis says: "It is our goal to reach our listeners all over the world wherever they listen to music - as a stream, download, on CD or LP. However, what remains decisive for us – and not least as a counter-weight to the culture of tidbits and excerpts – is the value of an album as a work of art which tells a story and opens up a whole world in which listeners can immerse themselves completely."
At the same time, Brandis has expanded ACT's range of activities since 2018 to include "Tambour Music Management", which has the aim of developing artists' careers and creating unique concert formats. Together with the label and affiliated music publishing company, ACT/Tambour can bring together all of the elements which artists in today's music world need to develop, and house them successfully under one roof. Meanwhile, Tambour Music Management represents many renowned ACT artists, but also several who are outside the label’s sphere: Avishai Cohen, Becca Stevens, Christian Jost, Kit Downes, Pedro Martins, Lucia Cadotsch, Eivind Aarset and many others. Despite the enormous challenges posed by the Corona pandemic, this branch of the business has managed to show steady growth over the past four years. 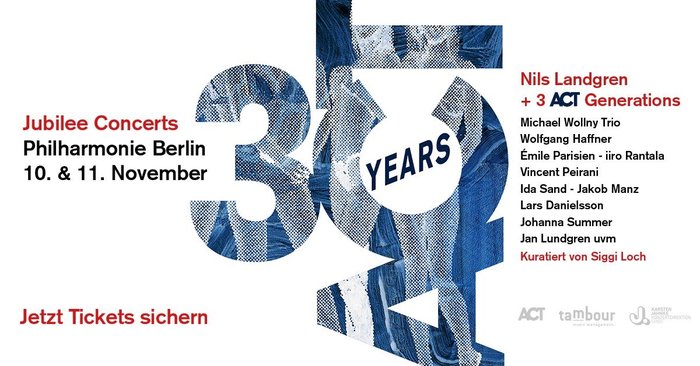 Over two evenings in the main hall of the Berlin Philharmonie, the ACT Family invites you to celebrate the label's anniversary.

The main focus of the concert on 10 November will be pianist Michael Wollny. A musician "who turns every conceivable influence into an experience that takes your breath away" (Die Zeit). He will be, first, in his trio with drummer Eric Schaefer and bassist Tim Lefebvre - the line-up that gave us a modern classic of European jazz with "Weltentraum", and which also has a new album to be released in autumn. He will also appear as part of the quartet "Out of Land" together with the French jazz stars Vincent Peirani (accordion) and Emile Parisien (soprano saxophone), as well as Swiss vocal virtuoso Andreas Schaerer.

On the second evening, 11 November, ACT artists from three generations will meet under the direction of trombonist/singer Nils Landgren, inextricable part of the history of ACT, ever since his first meeting with Siggi Loch in 1994. He is a tireless instigator, catalyst and promoter of young talent, work which has earned him, among other things, a federal honour in Germany, the Bundesverdienstkreuz. He is the ideal figure to unite three ACT generations on the same stage. There will be major artists like Lars Danielsson, Iiro Rantala, Nguyen Lê, Cæcilie Norby, Magnus Lindgren, Ulf Wakenius, Viktoria Tolstoy, Jan Lundgren, Gerardo Núñez, Wolfgang Haffner and Ida Sand. Plus established artists such as Michael Wollny, Julian & Roman Wasserfuhr, David Helbock, Eric Schaefer, Nesrine, Marius Neset, Jelena Kuljić and Tim Lefebvre. And rising stars too: Johanna Summer, Vincent Meissner, Jakob Manz, Diego Piñera, Fabia Mantwill, Daniel García, Phillip Schiepek and Anna Gréta.