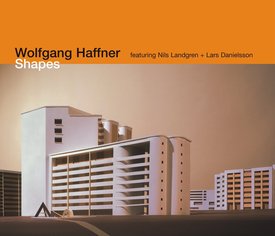 A master of equilibrium

Nils Landgren, Rigmor Gustafsson, Viktoria Tolstoy or the German Jazz Masters with Klaus Doldinger and Albert Mangelsdorff - the list of ACT-albums that feature the drummer is long. But now Wolfgang Haffner, who since the 1980’s has been one of the most prolific German jazz musicians, is presenting his first album on ACT as a leader. "Shapes" is the evocative title, and it describes the music well: Haffner has created delicate three-dimensional musical structures for this album. It features a subtly interacting quintet with trombonist Nils Landgren, trumpet player and pianist Sebastian Studnitzky, guitar player Frank Kuruc and bass player / cellist Lars Danielsson. Nils Landgren has produced this CD together with Haffner, who has been musical partner and drummer for the trombonist for years now. "We wanted to make a multi-layered album, one on which the music is prominent, not the drummer", says Wolfgang Haffner, and he and his collaborators have succeeded in an admirably organic and exciting way.

Haffner’s idea behind "Shapes" was to create, in his words, "an album with lots of air, lots of space". Haffner’s relaxed confidence as an artist ensures that this space is anything other than empty. It is the confidence of a musician, who was barely 18, when Albert Mangelsdorff asked him to play in his band. The list of stars who have hired the young but precise drummer includes greats such as Johnny Griffin, Clark Terry, Harry "Sweets" Edison and Joe Pass. Wolfgang Haffner’s list of credits seems almost infinite. It ranges from Michael Brecker to Pat Metheny, Till Brönner, Hildegard Knef or Konstantin Wecker, Manfred Krug and the girl-group No Angels. Only a real master can move between all these different genres with confidence. His tours have led him around the world. He is one of the prominent figures in German jazz, but this means - and the new recordings show that eloquently - that he does not need to prove anymore how good he is. He just is. The music he is making today is not primarily the music of a great drummer; it is music of a great musician. And neither he nor his musical partners feel the need to impress with their soloing skills, there is no flexing of muscles on this album. This leaves room for development that nurtures interest and tension.

All the compositions are by Haffner himself. They show his affinity for melodies that linger. The themes are lyrical and accessible. At times a bass hook will implant itself in the listener’s mind and feet. Haffner explains that he had in mind the players he was writing for while he was sitting at the piano. The compositions are tailor-made for the five musicians, as becomes obvious at numerous points during the CD: The lyrical solos for Lars Danielsson’s bass on "Crusin" and his singing cello on "Blue Bar", the weightless lines for Sebastian Studnitzky’s trumpet on the title track, Frank Kuruc’s brief guitar fragments on "Tomorrow Never Knows" (not to be confused with the Beatles song of the same name!), or Nils Landgren’s trombone on the refined final track "Silent Way", a take characterized by a calm, lyrical beauty, that is all the more moving for its simplicity. Haffner’s writing on "Shapes" lets the players immerse themselves in the music with seeming ease, and effortlessly draws in the listener.

Keyboards and programming are an integral part of the album and lend it an aura that is strongly characterized by electronics. But despite this, the music retains a directness and vitality. Haffner: "A good half of the tracks were first takes, two of the tunes we just jammed. And in general we left everything the way we played it." There are some pre-produced elements to the music – a synth line here, an atmospheric background there - and Haffner gave himself lots of time for the mix. "But even in the mix it was only about sounds panning back and forth or a delay every now and then." Finely tuned design, but what counts more is the well-balanced substance. The good chemistry between the musicians comes through in the directness of the playing, and Haffner’s integrity as composer and bandleader gives the album an organic feel. He really means it when he says: "This is a very personal album." Be who you are, and play what you like - this is the underlying, simple yet radical driving force in the band. The resulting ease and beauty are immediately compelling.