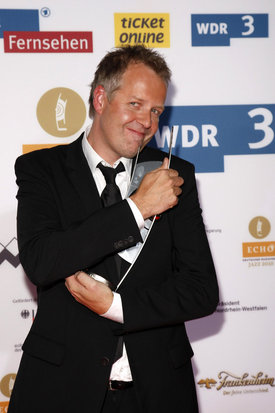 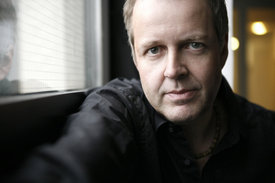 Wolfgang Haffner has been among the world’s most renowned drummers for a long time. He played with outstanding musicians like Chaka Kahn, Albert Mangelsdorff, Klaus Doldinger, Till Brönner or Nils Landgren. His discography as a sideman comprises more than 400 recordings, but as a bandleader and composer Haffner is no longer an insider’s tip. With his 2008 album Acoustic Shapes (ACT 9468-2) he made his way into the “world elite of piano trios” (JazzPodium).
It’s no wonder then that on his latest release, Round Silence, we again find Haffner in select company. The already successful trio, completed by Swedish bass player Lars Danielsson and pianist Hubert Nuss from Cologne, join with a selection of illustrious star guests, each giving the album its refinement through their specific style: Sting guitarist Dominic Miller, US American jazz guitarist Chuck Loeb, singer Kim Sanders and Swedish trombone player Nils Landgren all feature on Round Silence as soloists.
Not only does Haffner know how to play with great sensitivity, he also makes a great composer. He wrote all the pieces on Round Silence himself, showing an impressive simplicity that refrains from factitious phrases of melody, instead utilising a plain and highly convincing language of tones. The fabrics of sound subtly created by Haffner and his band are uplifting – the musicians form a fairytale air-like texture that shines across the musical spectrum. Sometimes it is the wind players, sometimes the guitar or even the human voice lightening up this self-balanced atmosphere and accentuating it with individual peaks.
Even though this album is the work of a drummer, Haffner never pushes himself to the fore. Even as bandleader he sticks to his belief that the music should come first, and does without any cheap showmanship or bravado on the drums. Instead, he shines with precise, varied and discreet playing. Haffner is always aware of his role within the band: “The drummer has an extremely important part. He fundamentally controls the direction of the music. The whole rhythmic base as well as the dynamics of the band are my responsibility.”
With Round Silence Haffner resumes the intimate musical language of his two previous albums, the recently German Jazz Award winning Shapes (ACT 9603-2) and Acoustic Shapes. But here he takes it one step further, dealing with a phenomenon that may seem like the nemesis of every musician: silence. Haffner doesn’t take it literally, but interprets it as serenely played music, free from needlessly hectic activity and tension. This does not however mean that the album is in any way lacking in suspense, friction and passion – Haffner’s writing, and the superb playing of his fellow musicians, sees to that.
Round Silence is an album that skirts around the quiet, calm spaces in the music without soundlessly passing by, and an attentive listener will surely appreciate its subtle rewards