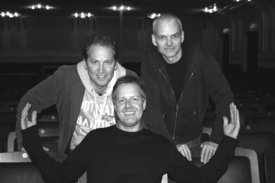 So many outstanding moments in the history of jazz have happened through pure chance. And so it is with Wolfgang Haffner’s Acoustic Shapes: as Haffner himself said, “In a sense, the project appeared out of thin air“. Actually, Ida Sand was scheduled as opener for the Nils Landgren Funk Unit Tour 2007. She had to pull out, however, and Landgren asked his long-time drummer Wolfgang Haffner whether he could take over the spot. Haffner would have to come up with something new and fresh, but those who know him know that the most important German drummer of the younger generation wouldn’t even think of repeating himself.

Haffner has been searching for new challenges ever since he was discovered at the age of 18 by Germany’s most famous jazz musician, Albert Mangelsdorff, and immediately began playing in the legendary trombonist’s band. Haffner has long scaled the summit of European jazz as drummer for Klaus Doldinger’s “Passport” (1989-2000), the all-star group “Old Friends”, and the bands of Till Brönner and Nils Landgren. However, his musical expertise is not restricted to jazz; Konstantin Wecker, Xavier Naidoo, the “Fantastischen Vier”, Manfred Krug, Tom Gäbel, Max Mutzke, and “No Angels” have put their trust in his amazing combination of precision, dynamics, and stylistic diversity. And through his work with such international stars as Chaka Khan, Pat Metheny, Cassandra Wilson, Lalo Schifrin, Bill Evans, Mike Stern, the Brecker Brothers, and Chuck Loeb’s fusion band “Metro”, he has become one of the few German musicians who has succeeded in making the breakthrough onto the international scene. Haffner is also on a number of ACT albums, rubbing elbows in the high musical society of the likes of Nils Landgren, Rigmor Gustafsson, and Viktoria Tolstoy.

It’s an unrivalled résumé for someone who is just 42 years old – and it’s amazing that with all of these musical commitments Haffner can still find time for his own pioneering projects as drummer, composer, and producer. These projects include a dozen CDs under his own name, along with his assuming the role of mastermind behind the Icelandic super-band “Mezzoforte”, and founding together with Roberto Di Gioia the nu-jazz forerunner “Zappelbude”. With the release of his previous ACT CD Shapes (ACT 9603-2) in May 2006, Haffner reached another milestone in his own creative career. Critics praised the album as “addictive”, “ingenious and sophisticated”, and ”a meld of catchy melodies, clever electronics, classic rock, new jazz, and a cool, hip sound aesthetics”. An intoxicatingly exciting tour followed in which, among others, the NDR (North-German Radio) Big Band, and the Jazz Baltica Ensemble were integrated into the musical scheme. The tour was also captured on film and made into a DVD.

Nils Landgren was involved in Shapes as trombonist and co-producer, and so it only made sense that Haffner go back to this project, since it was supposed to be a tour for and with Landgren. At any rate, he went back to the roots: “Originally I wrote Shapes for piano trio, but the time called for electronics. Now I want to go back to my original starting point.” So Shapes is transposed into Acoustic Shapes, which, by the way, is much more than a simple reduction. Haffner comments: “It’s not just Shapes minus the trumpet and the electronics. I spent six weeks re-arranging all the music. Some of the parts are completely new. For instance, the club track “New Life” has been turned into a jazz waltz in ¾.” The drums’ function is also re-defined over large sections so that the sounds and textures are more in the vein of the classic small jazz drum set of modern jazz.

Once the theoretical framework was finished, Haffner considered whom he should choose as playing partners. Haffner’s preferred bassist over the last years, ACT recording artist Lars Danielsson, quickly filled the bass chair. Haffner came up with a surprise for his choice on piano, however. He called on an old playing companion, Hubert Nuss, who has lately attested to his “mastery of musical forms” and “a feeling for the finest of nuances” in his own trio with John Goldsby and John Riley.

The results are even better than were expected: Haffner’s brilliant melodies shine with even more clarity, his swing has even more presence. And the numbers, ranging from the lyrical through the breathtakingly up-tempo, are even more incisive, concentrated, and filled with fascinating contrast. The audience’s enthusiasm and excitement over this new concept has been duly caught on this live recording from the Philharmonie Berlin. Haffner says it this way: “Acoustic Shapes represents a part of me that has been put in the background lately. This project was very liberating for me.” There is only one Wolfgang Haffner. On ACT you can now discover at least two of his artistic sides.