Viktoria Tolstoy
Pictures Of Me 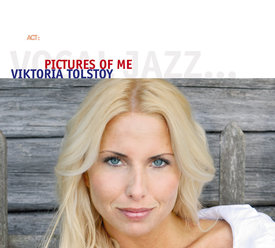 If you click on the link below you can see a VIDEO of Viktoria Tolstoy performing the song "South" from her new album Pictures of Me during a Swedish television show:
http://tv4.se/klipp/74416.html

This CD sets an example. It bids farewell to the never ending grumbling and groaning about the dark future, and the demise of culture in the age of the TV-commercial and the ring-tone. “We should not take life too seriously all the time”, says Viktoria Tolstoy, which does not go to say that she makes life simpler than it is. Pictures Of Me, the singer’s third release on ACT makes the impossible seem easy: It celebrates profundity with ease, retains artistic integrity, yet oozes a feelgood spirit that is infectious, and shows that even some of pop’s greatest masterpieces can still be perfected further. An amazing feat!

Paul Simon, Prince, Peter Gabriel, Stevie Wonder, Alan Parsons, Seal, Van Morrison – for the repertoire on Pictures Of Me, Viktoria Tolstoy has looked only to the best for inspiration. She rummaged through her personal record collection, and found more than a few hidden treasures. “I revere these artists. I’ve been listening to their music since I was a young girl, and I picked some of their less well-known pieces for the record.” Collaborating with her long time piano player Jacob Karlzon and her current producer, the amazing bass player and cellist Lars Danielsson, she has found wonderful arrangements for their convincing adaptations. While Prince’s original “Te Amo Corazón” sounds rather sweet and aloof, it now shines in full bossa nova glory. Peter Gabriel’s x-rated “Kiss That Frog” gets a full dose of gumbo-chilli blown up its rear, and Van Morrison’s “The Way Young Lovers Do” is transformed into a polyrhythmic modern-jazz piece.

“The original version of this song is completely hysterical,” Tolstoy laughs, “it sounds as if all the players were high on drugs. Van Morrison yells his way through the song. It was a challenge to make a tune out of it again. Oh well, I guess our version is still hysterical enough.” There is a palpable uninhibited quality to this album by the singer born in 1974 near Stockholm. The most astonishing example is her soulful interpretation of the Seal song „Don’t Make Me Wait“. “I love to sing the blues!” Tolstoy declares, revealing another new facet to Leo Tolstoy’s great-great granddaughter on this, her most expressive album to date.

Her “crystal-clear voice, that is simply enchanting”, as the Berlin-based “taz” once put it, has found Tolstoy a place in the hearts of audiences far from the habitat of the Elk. In 1997 the – then 22 year-old – recorded the phenomenal album White Russian under the guidance of Esbjörn Svensson. The melodious pop-jazz on this release made her a star and lifted her into the charts in Sweden, yet it was hardly available outside her homeland. The move to ACT in 2004 enabled her to break into the international scene. On Shining On You (ACT 9701-2), she sang the music of Esbjörn Svensson yet again, to the piano accompaniment of a certain Bror Falk, whose identity remains open to speculation… Within the year of its release, Shining On You received the German Jazz Award. The 2005 follow-up My Swedish Heart (ACT 9705-2) led to long tours all over Europe and Canada. Even ABBA-mastermind Benny Andersson succumbed to Viktoria’s charm. In accompanying her on piano on Nils Landgren’s Funky ABBA Album (ACT 9430-2) he made an exception to his rule not to play the old songs of his super-band any more, and the ballad duet „When All Is Said And Done“ turned out to be a heartbreaking take.

On Pictures Of Me Viktoria Tolstoy’s singing is especially poignant on the five originals written for her by Lars Danielsson, Caecilie Norby, Jacob Karlzon and – as lyricist – her husband, former skateboard world champion and fashion designer Per Holknet. These compositions are in the same league as the works of Prince, Paul Simon & co. and they may well become classics in their own right. “Absentee”, placed in the middle of the album, is especially moving. “I think this is the song I love most,“ says Tolstoy, “it’s about feeling completely untroubled and free. Maybe this is the secret motto of the album. Don’t think, feel.” Life can be so easy sometimes; you just have to let it be. May the listeners now form their own impression of Scandinavia’s most exciting singer, and may they have a smile on their lips.