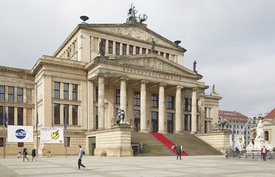 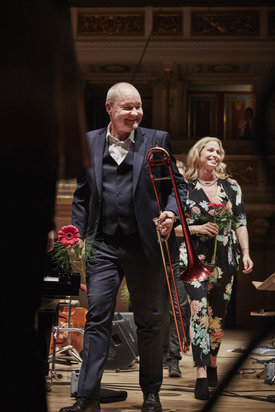 “We fly like birds of a feather,” runs the Sister Sledge lyric. And so the musicians did – thirty-four of them flocked to the Konzerthaus in Berlin, from several countries of Europe, each of them an artist who has found a nurturing home for his or her projects and talents on the ACT label. It was their way of expressing gratitude, and of giving their label a 25th birthday present. The musicians appeared on stage in a whole variety of combinations throughout the day, some of the bands formed for these concerts having never been put together before. It was in every sense a special occasion: a day of very fine concerts, a joyous celebration of the passing of an important milestone - the date marked exactly twenty-five years and one day since the ACT label put out its very first release in 1992 - and a happy gathering for the label-as-family. What this unique event brought to the fore was that precious common spirit and attitude among these musicians: an openness and respect for the individual and very different talents of the others, the courage to take risks, and an ever-present willingness to welcome in the unexpected and to discover the new.

The musicians are also from several different generations, all bringing their combined energies to the event. For example, saxophonist Emile Parisien and pianist Joachim Kühn were born nearly forty years apart, and yet their mutual understanding, their common way of making music and generating excitement makes a detail like that an irrelevance. There were two other trans-national duos on the album. Whereas saxophonist Parisien and Kühn brought high-voltage excitement, and received a loud ovation, the two double basses of Lars Danielsson and Dieter Ilg channelled very different emotions. Two bassists playing together tends to be a recipe for pure joy, good humour, bonhomie and mischief, and that was exactly what these two master musicians offered. The third duo of Nils Landgren and Michael Wollny brought warmth, affection, and wistful poetry and beauty to Sondheim’s “Send in the Clowns,” which opens the album. These three intimate conversations were just part of the story of an unforgettable day. A quartet feature was led by violinist Adam Bałdych, whose ski-ing accident just a few days before had not deterred him from attending this joyous gathering - he was supported by crutches to get on and off the stage. Then there was a special one-off formation of Nils Landgren’s Funk Unit in “Walk Tall”, the band propelled by Wolfgang Haffner’s crisp, in-the-pocket drumming.

One of the features of the ACT label is that founder Siggi Loch is a natural connector and helps the formation of new bands. A quintet around Nguyên Lê and the quartet led by Adam Bałdych were created especially for the evening. Lars Danielsson’s “Suffering” has as its first soloists two ACT cornerstone artists who have helped to define the many-sided identity of the label: Nguyên Lê and Nils Landgren. Another more established quartet which ACT has helped into existence is the supergroup of Andreas Schaerer, Emile Parisien, Vincent Peirani, and Michael Wollny. “B&H” shows these four stars of European jazz, all of a similar age, keeping each other and the audience on their toes. A celebration like this could run the risk of drifting into memory and nostalgia – this one didn’t. ACT has issued over 500 albums, so there is much to look back on with pride…but one moment found an inspired way to look to the future as well. The listener might wonder who the drummer and guitarist are, playing with such ease, flow and total assurance on “Dodge The Dodo.” They are Noa and Ruben Svensson, sons of the much-missed Esbjörn.

The culmination of the day of celebration in Berlin was a Gala Concert by the “ACT Family Band.” The evening built naturally to a whole-band, whole-family finale in which the combined ensemble, led by Ida Sand, launched into “We Are Family”. As an expression of togetherness, of a shared joyful ethos it would be hard to beat. These Jubilee Concerts made it possible to experience at close quarters what ACT exists to achieve: it is a leading label where listeners can discover newly created music “in the Sprit of jazz.” The label’s range and its previously unimagined connections are a constant source of surprise from which it draws ever-new inspiration to connect the unexpected. Mike Flynn, Editor of Jazzwise wrote in his review of the concert that the ACT label has “a smile on its face and a swagger in its step”. And where might the best evidence for that statement be found? It’s all there on this album.