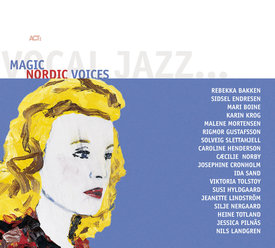 Scandinavia’s great choral tradition, its marching bands, the excellent music colleges: all valid factors encouraging the cornucopia of good jazz singers that has been steadily emerging from this sparsely populated region in Europe since the 1960’s. Back then however, singers who wished to be successful on the continent had to twist over backwards: Gitte Haenning, Wencke Myrrhe, Siw Malmquist, Bibi Johns or Alice Babs, all of them serious jazz singers at home, they became schlager stars in Germany. Others like Karin Krog, Lill Lindfors or Monica Zetterlund stayed true to jazz and were part of the first flowering of the music up north, but had to give up on a real commercial breakthrough.

Today’s Scandinavian singers no longer need to compromise on substance. The renaissance in jazz singing has not only swept singers in Denmark, Sweden and Norway in its wake, it has -to a large extent - been initiated by them. This new generation grew up with MTV and the Grand Prix d’Eurovision, with ABBA and Björk, with chanson, funk, hip-hop and drum’n’bass; it is a generation more open to the world and its diverse musical styles. Many of them, among them Silje Nergaard, Rebekka Bakken or Rigmor Gustafsson are not only remotely influenced by the melting pot America, but have spent their formative years there.

Today’s Scandinavian singers can hold their own next to US-stars like Diana Krall or Norah Jones. This is to no small extent thanks to ACT. Siggi Loch, whose affinity to the Nordic jazz scene goes way back to the 1960’s, recognized early on the potential and class of singers Rebekka Bakken, Rigmor Gustafsson, Viktoria Tolstoy, Solveig Slettahjell and lately, Ida Sand, and brought them into the international limelight for ACT.

So it seems only consistent for Loch to present the first serious compilation of “Magic Nordic Voices” on the ACT-CD of the same name. And because he was intent on presenting a meaningful cross-section, he not only gathered his own artists (with mostly unreleased material), but also the competition’s most important exponents. We would like to use the release to thank Universal, ENJA, Stunt, Amigo, Curling Legs and Content Records for their co-operation.

As expected the Nordic Voices-team includes a broad spectrum of artists: Karin Krog is included as an exponent of the old school, that remained true to the Great American Songbook, as well as the veteran of Nordic folk poeticism Mari Boine. Rebekka Bakken, the multi-faceted avant-gardist, contributes her fresh approach to a Norwegian traditional. One might call them the trail blazers of the power siren’s new approach that falls between jazz, blues and rock: Sidsel Endresen, Susi Hyldgaard and Caecilie Norby are included as is Silje Nergaard, who presents not her recent trio with Tord Gustafsson, but her new duo with her husband Heine Totland.

Many jazz oriented singer/songwriters now follow in their footsteps. The selection of Malene Mortensen, Josephine Cronholm, Jeanette Lindström, as well as the ACT-quartet Rigmor Gustafsson, Viktoria Tolstoy, Solveig Slettahjell and Ida Sand presents the best of them. The claim that Scandinavia has today become a haven for style- and globetrotting ladies from the motherland of jazz is supported with the inclusion of vocal chameleon Caroline Henderson. Nils Landgren, star trombone player on ACT, for ages now a talent-scout, mentor and producer of many Swedish singers and himself lately coming to his own as a unique voice in jazz, completes the circle with his inclusion of the promising - and as yet unknown in Germany - Jessica Pilnäs.

So this is truly a colourful bouquet. But with its own complementary colour: Even the most “American” of these singers, share a common trait: besides their exceptional musicality, they show an individualism that may be the magic ingredient: The unmistakeable influence of North European folk music. Depth of feeling, introspection, purity – these are the distinguishing factors, that separate them from other singers. And it is precisely this connection between a strong and timeless tradition and an awareness of the contemporary and upcoming currents that lets us expect even more from the future, and momentarily guarantees unrivalled enjoyment.