Various Artists
Magic Moments 9 "In The Spirit Of Jazz" 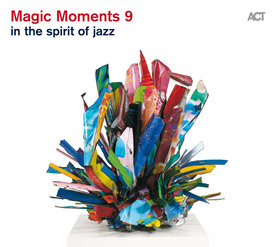 This CD presents sixty-five minutes of the best of current jazz. Thoughtful moments sit alongside pure joy and entertainment. Coruscating energy is there, but serene contemplation too. With established ACT stars and promising newcomers, this is music for open ears, for the mind and soul. And for everyone who loves good music.

“Jazz is the freedom to play anything.” At ACT, we let those words of Duke Ellington resonate through everything we do. Our releases do not adhere to a single musical canon or to a fixed sound aesthetic. Our motto is: “in the spirit of jazz.” Jazz is at the centre of our vision, because we delight in its openness to so many strands and inspirations: classical music, music from other traditions, and pop and rock.

Magic Moments 9 opens with a homage straight from the heart to a person we all miss in the ACT family; the first track is a symphonic interpretation of the e.s.t. piece  “From Gagarin’s Point Of View,” remembering pianist  Esbjörn Svensson.

“ACT seems to be on a mission to introduce the world to Europe's rising new jazz-classical pianists”, wrote John Fordham in The Guardian a couple of years ago. We have continued further along that path and Magic Moments 9 offers vivid reports from some places where that continuing journey has taken us. We take in Schloss Elmau in Bavaria, where the new duo CD by Michael Wollny and accordionist Vincent Peirani was recorded. From their album we hear “The Kiss.” Plus we travel to Austria and then to Martinique: two piano players who are both making their hugely promising debuts on the label are David Helbock and Grégory Privat.

We also hear from two pianists of renown: the 'old master' Joachim Kühn is joined by his 'young lions' Eric Schaefer (drums) and Chris Jennings (bass) for a refreshing take on “Sleep on it,” a reggae-dub number by the French band Stand High Patrol.   Iiro Rantala is on fine form in the “super-trio” with Lars Danielsson and Peter Erskine. They play Kenny Barron's “Voyage” with a Finnish lightness of touch.

Der Tagesspiegel wrote of the “Jazz at the Berlin Philharmonic” concerts: “This is jazz history in the making”. We have released recordings of two further completely memorable evenings in one of Europe’s great halls: in “Tears for Esbjörn,” a group consisting of  stars of the ACT label unite to pay homage to Esbjörn Svensson. In “Celtic Roots” we set off into the swirling mists of the North, in search of the Celtic influences on jazz.

ACT is the place to hear European sounds. A good example is the new Mare Nostrum recording, seven years after the first. In the track “Kristallen den fina,” Jan Lundgren und Paolo Fresu have combined the musical hues of Sweden and of Italy, and the results are magical. For more than 20 years, Nils Landgren has been setting the agenda for European jazz like no other musician. His project “Some Other Time” also draws its inspiration from the other side of the Atlantic. He pays tribute to the great Leonard Bernstein, deploying all of the rich textural possibilities offered by the Bochum Symphony Orchestra. Swedish pianist Jan Lundgren, with a classical string quartet honours one of the great pioneers of Swedish jazz,  Jan Johansson. In  “Lycklig resa” (meaning 'bon voyage').

The extraordinary encounter of the guitarists Gerardo Núñez from Spain and Ulf Wakenius from Sweden demonstrates what can happen when an intercultural musical exchange really delivers the goods. The interplay, the sense of flow generated by three Scandinavians Lars Danielsson (b), Marius Neset (sax) und Morten Lund (dr) in their album “sun blowing” is “a testament to the power of spontaneity and trust” (Irish Times) - evident in the track “Folksong.”

The Finn Jukka Perkko and a new “strong and distinctively touching voice” (Jazz Magazine) from France Lou Tavano also make their mark, and contribute to the richness of the ACT label's offering of characterful European sounds.

Magic Moments 9, packed with all kinds of excitement and emotion, not only captures an up-to-the-minute snapshot of European jazz in the many different forms it exists today, but also offers a glimpse into its future.