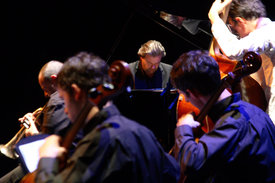 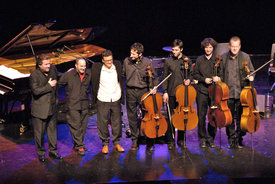 Shepherds’ songs as jazz-elegies, lyrical piano-play, cellos acting as a male choir, and a flugelhorn radiates an alphorn aura: Lyoba rings quietly, plaintively, and with exceptional feeling. Music out of Switzerland that is not limited to the tastes of fellow countrymen; rather, it has a universal jazz sound for the whole world. Alongside George Gruntz, Thiery Lang is the most successful Swiss jazz export, and wherever pianist Lang has presented this music live he has left behind an enthralled public. With the support of the Migros cultural foundation, Lang had released two Lyoba albums locally in 2008 and 2009, now with Lyoba Revisited, ACT has made it possible to bring Lang’s successful project to international ears in a new and more mature vision.

With an unusual line-up, “the quiet poet who loves listening back to the sounds and caress the piano keys” (Neue Zürcher Zeitung) transforms these folk melodies from the Canton of Fribourg into fine chamber-music-jazz of unusual beauty. And along with the moving melodies, the class of the arrangements and the musicians – not the least of which is the flugelhornist Matthieu Michel – makes sure that this beauty has an existential intensity.

Thierry Lang has worked on melodies from the region of Fribourg in West Switzerland, the same area that produces Gruyére cheese. The pianist, who has studied classical and jazz, has been involved with this music for a long time, since he himself comes from this area. In the first half of the 20th century, there was a priest from this region by the name of Joseph Bovet. He was especially known for his four-part compositions for male choirs. The melodies of Joseph Bovet (along with one of his spiritual compatriots, Pierre Kaelin) are still hugely popular – Thierry Lang calls them Swiss standards: “The people sing these melodies with devotion and from the heart; for them these songs are almost like praying.”

The instrumentation on Lyoba Revisited is particularly interesting, and is part of what sets it apart from other chamber-jazz recordings. To the traditional jazz instruments of piano, bass, and flugelhorn Lang has added four cellos, which in their range and character come very close to the male voice, and therefore are able to faithfully emulate the tone of Bovet’s original compositions. Lang did without drums in this line-up. He said that he didn’t want to use any stylistic device that would impose a conventional jazz aesthetic onto the original pieces.

One of the pieces is called “Ranz des vaches”, a traditional song used to call in the cows to the stalls to be milked. Such a calling of the animals, in which the Celtic word that gave Thierry Lang’s project its name – “loba” – is used, was something Joseph Bovet had also worked on. Bovet’s choir song became a quasi-national hymn for the French-speaking Swiss. The “Ranz des vaches” is the first composition on the present CD. And there is another reason for this: a pure and simple mystic aura envelops such shepherds’ songs. Jean-Jacques Rousseau stated in his music dictionary that in the 18th century it was forbidden to sing a “Ranz des vaches” to Swiss soldiers. It was feared that these songs would weaken the soldiers’ will to fight by making them homesick. Only a music with considerable suggestive power could do such a thing. And these qualities also pervade Thierry Lang’s arrangements.

There is an amazing natural ease in the way the cellos work together with the other three instruments. The cello voices flow organically into one another. They unfold gracefully – just as do the choir recordings of Abbé Bovet. The piano marries expressive jazzy accents with subtle harmonization, Heiri Känzig’s bass adds a finely tuned propulsive foundation for the pieces, and Mathieu Michel’s flugelhorn playing unfurls with an entirely unique melodic magic. Michel is a virtuoso of finely modulated tones; and he produces them without bluster as the flugelhorn’s voice gently rises over the other instruments, an impending breath, a subtle echo from the mountains. Sometimes this brass instrument sounds very much like an alphorn. And at the same time it is simply a brilliantly played jazz flugelhorn. The three-man team’s delicate, intricate harmonies guarantee a wide range of colours – even tango rhythms don’t feel out of place coupled with the artful sound of the Alps.

One critic called these pieces “music for the homesick”, and Lyoba Revisited is music filled with warmth, magic and subtlety that immediately recalls the meadows and mountains of its place of origin. There is also an element of gentle humour, as hinted at on the last track which is dedicated to “Le Moléson”, a famous peak in the Swiss Alps. More than this however, it is gripping, persuasive music, and upon listening it will awaken the sense of nostalgia for other homelands, just as the Swiss wished. Even when one has no bank account there.