Various Artists
Hendrix in the Spirit of Jazz 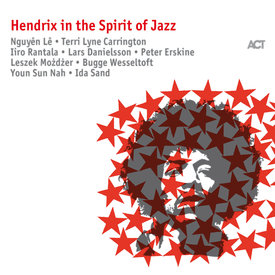 „When I die, I want people to play my music, go wild and freak out and do anything they want to do.“

Jimi Hendrix’s wish has been posthumously fulfilled. Although he had such misfortune in life, and died in 1970 at a mere 27 years of age, his immortal music has continued to be played ever since his death - very much in the spirit of that quote. Countless musicians in rock, pop and jazz have been influenced by Hendrix, and many have overtly based their own music on his. Among the ACT family of artists, several have been inspired by his music, and have found their own individual ways to play it. In November of this year this icon of the 1968 protest movement, this pioneer of rock would have been 75. A good reason, then, for ACT musicians to gather together for a retrospective called “Hendrix in the Spirit of Jazz”, to let the unique spirit of this genius of the electric guitar soar again.

Pride of place here goes to Nguyên Lê. 25 years ago, he was the first artist to have an exclusive contract with ACT, in its first year of existence. As a self-taught guitarist, the Vietnamese-French musician is stylistically close to Hendrix, and the American has discernably influenced Lê’s instantly recognizable world music, which innovatively blends elements from Europe, Asia and America. Indeed, one of Lê’s very greatest successes was the 2002 CD “Purple – Celebrating Jimi Hendrix”. His versions of “1983…(A Merman I Should Turn To Be)” and “If 6 Was 9” form the centre of “Hendrix in the Spirit of Jazz”.

Lê is immaculate in the way he lives up to the challenge of the title, taking all the freedom and danger of Hendrix’s rock music, and using the subtle craft of the jazz improviser to enhance it. Alongside Lê, Terri Lyne Carrington is a pivotal figure in this recording. Hendrix's themes are sometimes furiously rocky, sometimes soulful or atmospherically dream-like, and she not only propels them from the drums, she uses her voice to express his lyrics, which she also expands with thoughts of her own.

And the other ACT stars on this album demonstrate what a kaleidoscope of colours, a diversity of styles and and lively cosmos Hendrix's pieces can become: whether it is Bugge Wesseltoft transforming “Angel” into a tender solo piano ballad, or his Finnish pianist colleague Iiro Rantala in a trio with Lars Danielsson on bass and Peter Erskine on drums on “Little Wing”. Or it can be the unique Youn Sun Nah’s “Drifting”, intoning an irresistible call of longing, or her soulful Swedish sister-in-jazz Ida Sand, wonderfully expressive in “Manic Depression”. From the NDR Bigband rocking out on “Voodoo Chile” to the ACT Family Band - Cæcilie Norby, Céline Bonacina, Wolfgang Haffner, Lars Danielsson with Nguyên Lê again – performing the most famous Hendrix anthem “Purple Haze” in front of an ecstatic audience celebrating the 20th birthday of ACT.

“Hendrix in the Spirit of Jazz” is an anthology which shows that Hendrix’s music is as alive as it ever was – maybe even more so. And what it does -musically at least - is to encourage listeners to ‘go wild and freak out and do anything they want to do’.