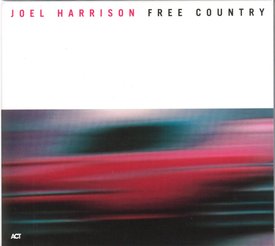 Free Country is a collection of old American Country and Appalachian tunes arranged in unusual, sometimes radical, ways. Simply put, this body of work is my sonic view of the experiment known as America- not the billboard, but the underbelly.
I love these songs, their pathos, economy, magisterial beauty, sly wisdom, and deep soul. I have tried to be true to their timeless, primal spirit, while illuminating their essence with my own imprint, using every musical device at my disposal.
Each song is a story, retold through the lens of my composing, arranging and the enormous jazz improvisational skill of the players.
The tunes are a narrative history of this country. I expect their poetry will outlast us all, opening a door to the backroads, the lost footprints, the heartbreak, and hollering of our strange, wayfaring nation.

Joel Harrison grew up in Washington D.C., a town where South meets North, Jazz meets Country and Rhythm and Blues, and politics collide with culture. One of his big influences growing up was D.C. legend, guitarist Danny Gatton, who, like Harrison, walked the line between many different styles of American music. After leaving D.C. in 1975 Harrison’s tastes grew from Americana to include Contemporary Classical music, and Folk music from all over the world, especially African and Indian music.

Harrison began "Free Country" in Northern California in the 1990’s where he also led  a Jazz Sextet and organized tributes to Jim Pepper, Jimmy Guiffre, and Soft Machine. In 1999 he moved to New York City where he continues to lead numerous bands, write music for film, and perform as a sideman. Harrison’s previous releases mainly showcase his talents as a composer, but on this record the agenda is different. His goal has been to focus all his influences into the framework of the Mountain music of the South.

The incomparable Uri Caine plays like ‘Charles Ives meets Duke Ellington’, and Rob Thomas, a member of the String Trio of New York, adds rich coloring and lines. The rhythm section goes from bare bones groove to rampaging detours, and Rob Burger of Tin Hat Trio and Tony Cedras, of Paul Simon’s band, add  poetic commentary on accordion. Harrison holds it all together, creating mood and ambience that unifies the disparate elements.