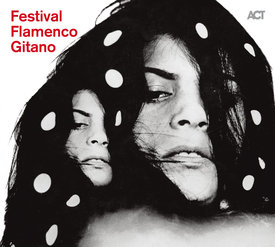 CD 1 The Original:
Original album released 1966 on Fontana (885 425 TY)
Concert tour produced and presented by Lippmann+rau
Artwork based on the original program book by Günther Kieser

Flamenco is among the richest and liveliest of the musical treasures of Europe. Its century-old tradition, which originated in Andalucia, is now listed in UNESCO's Intangible Cultural Heritage of Humanity. Nevertheless, it is frequently misunderstood, and is often to be seen in inauthentic forms: it gets rolled out as a show to entertain tourists, there's a watered-down folklore version, or it is adapted and finds its way into opera (Carmen, for example), drama or dance. These all have very little in common with the original and true form of Flamenco.

The Festival Flamenco Gitano was one of the first recordings which faithfully captured the particular magic of this music. This significant document from 1965 has lost nothing of its fascination, and remains to this day one of the finest flamenco performances to find its way onto disc. The pre-eminent exponents of the art at that time had gathered, and gave of their very best.

Producer Siggi Loch about the recording:

Guitarist Paco de Lucía and the singer Camarón de la Isla were responsible in the 1970s for a veritable boom in flamenco, but it is therefore to the eternal credit of Olaf Hudtwalcker, who was the President of the German Jazz Federation in 1965, and of promoters Horst Lippmann and Fritz Rau, that they brought the authentic art of flamenco to concert halls outside Spain for the very first time, and allowed its true characteristics and its many facets to be appreciated by audiences. I had the privilege and the pleasure to produce a recording of the programme from that tour. After the end of the concert on the 15th November 1965 at the Titaniapalast Berlin, we made the recording during the night, in the studio of the former hotel Esplanade ruin, right by the Berlin wall.

The extraordinary success of that Philips-twen album, by the standards of that time, resulted in a further recording the following year, which we made in Stuttgart. The two releases, “The Original Festival Flamenco” and “Da Capo” are now being released together in celebration of the 50th anniversary of the original recording. They are appearing as a 2 CD set with full documentation. The release is also in grateful memory of the promoters Lippmann+Rau. In terms of cultural value, what they did to bring flamenco out of the shadows was an achievement of unique significance.

Flamenco enshrines all the emotions that it is possible to express through music: love, hate, loneliness, and even feelings of being rooted and secure. In the beginning, in Spain, flamenco was the music of the oppressed and of people at the edges of society, such as gypsies, Jews and the homeless. Flamenco gave them the conduit to express their pain and their sense of being lost, but it also gave them the chance to portray the immutable will and spirit with which they could sing and to dance their way out of despair. Flamenco is is Spanish soul music. It is completely alive, it is timeless, and it comes from deep.

"The Original Festival Flamenco" (CD1) has ben released before, in 1993 on the ACT subsidiary label  EMOCIÓN. "Da Capo" is appearing here for the first time on CD, having been brought out previously just once, in 1966 as an LP on the Fontana label.