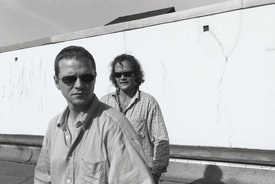 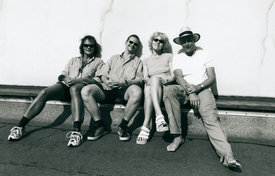 Good things need time. What began at a party given by ACT head Siggi Loch in 1998, with everybody in an expansive mood after a few glasses of wine, had to ferment in the musical archives for over a decade before it could be served with its now full-bodied bouquet: McJazz is anything but musty. And it’s because of its retro-touch that it sounds so cool. Two influential figures in the German pop business, Annette Humpe and Anselm Kluge, are responsible for this; with the band “Ideal”, Humpe pointed the direction for the German New Wave and today she storms the charts with “Ich + Ich”. Kluge was a much sought after studio bassist in the ‘70s and ‘80s, and is now a professor for the pop music course at the Hamburg college of music. He arranged for “Die Prinzen”, and produced Jule Neigel along with Nils Landgren.

On Bass Me the name is the program: as Annette Humpe recounts, “We were simply fooling around, checking out how many hot hip bass lines there are in the music world. Then we thought that at some point someone has to re-interpret and then improvise over them.” And thus Bass Me is a tricky guessing game. Check out which piece’s bass line reminds you of a Jimi Hendrix hit, for instance, and which one sounds like one or another of the pop and rock greats.

Pop, electronic music, and jazz flow together; emotional jazz improvisations settle over laid-back grooves, garnished with keyboard fills and hip sounds - you could call it NuJazz, or just McJazz. The insistent beat on „Heidelberg“ drifts directly onto the dance floor. The “bounce”-groove on “Millie Grazie” comes up feather-light. „Gucci & Versace“ and „Macht Nichts“ take care of the chill-out factor on Bass Me. The music flows with a light-footed carefree feeling. There are, terse ear-catching hooks on each of the album’s 12 pieces, all artfully composed and arranged with a loving attention to detail.

And with the contributions of the two jazz soloists, McJazz is anything but musical fast-food: saxophonist Peter Weniger und trumpeter Ingolf Burkhardt give Bass Me an especially exciting taste – one moment they’re playing unison lines, and throwing out crisp horn riffs, the next they’re tossing around improvisational balls, until one of them breaks out with a solo, only later to come back to the other in a dense tangle and snarl of sound. The two horn players call up the complete emotional palette, from expressive high notes on through to low-key laid-back and cool. Burkhardt and Weniger are first-class jazz musicians of international calibre: The former has played as a member of the NDR Big Band, and with such jazz legends as Lionel Hampton, Al Jarreau, and McCoy Tyner, the latter one with such greats as John Abercrombie, David Liebman, Billy Cobham, and Paul Kuhn.

“Above all, McJazz should be fun,” says Annette Humpe. “Bass Me is meant for cafes and lounges, for cool clubs and parties. It’s not serious jazz, we’re not able to do that. We can do pop, and love jazz, so we do it our way. And that’s why Siggi at first let our music disappear into the cellar.” But over the years the McJazz theme kept popping up, and in the end the ACT owner decided not to withhold Bass Me from the music world. Ten years after its inception, now’s the time to pop the cork and enjoy