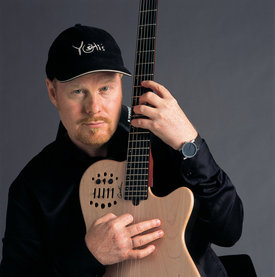 The task: To capture the lifetime achievements, and the essential essence of the best ACT-artists. The solution: ACT Signature Editions. Much more than a usual “Best Of” album, on these double CD-sets the musicians themselves picked out 24 pieces, which they feel represent the most important, significant and personal selections from their repertoire. Remastered and given the best possible post-production. An excellent introduction for established fans as well as newcomers, who have yet to discover the musicians and their art…

Between 1997 and 2007 the Swedish musician Ulf Wakenius held what may have been the most prestigious spot in jazz for a guitarist: a chair in the Oscar Peterson Quartet. This was the coronation of a career which included many record-breaking moments, first in Sweden, then in Europe and in the USA. Wakenius’ guitar duo Guitars Unlimited (alongside Peter Almqvist) rocked Scandinavia in the early ‘80s, culminating in the 1985 Melody Grand Prix, which was seen by 600 million viewers, probably the largest audience a jazz guitar duo has ever had. His following solo album, recorded in Rio de Janeiro with outstanding Brazilian musicians and the beginning of a life-long love of the Brazilian culture, also became a huge hit.

Shortly after that Wakenius started an extremely successful and longlasting collaboration with the legendary bass player Niels-Henning Ørsted Pedersen, and both of his duo albums with another bass icon, the great Ray Brown, topped the US Jazz charts. Wakenius’ story is one of great success, and one which has continued since he became an exclusive ACT-artist in 2005.

On his Signature Edition, Wakenius leads us on a rollercoaster ride through time, themes and styles, illustrating two sides of his outstanding talent: on one hand Wakenius is a stunning virtuoso of the jazz guitar, on the other he is an incredibly subtle and lyrical creator of smooth and sweet (sometimes bittersweet) sounds. This makes him an ingenious interpreter of great composers, and it is no coincidence that his Signature Edition starts with “Dancing” and ends with “My Song”, two tasteful versions of compositions by Keith Jarrett on his fantastic ACT debut Notes From The Heart.

Nor can one be surprised that songs by Wakenius’ friend and compatriot Esbjörn Svensson (taken from his ACT-album Love Is Real) build the backbone of the double-CD. In between the American and Swedish traditionals and pieces by Oscar Levant, Egberto Gismonti, Lars Danielsson and Ryuichi Sakamoto (as well as with three of his own compositions), Wakenius demonstrates that he is able to play every possible guitar-style in his own, melodically-structured way. Because of this devotion to melody he equally is an ideal companion to singers like Viktoria Tolstoy and Youn Sun Nah, or compelling instrumentalists like Randy Brecker, Bill Evans, Jack DeJohnette, Till Brönner or Nils Landgren - all represented on this quintessential body of work from Ulf Wakenius