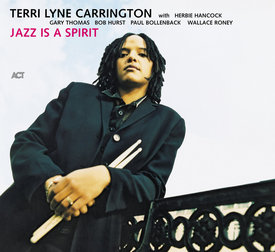 Jazz Is A Spirit

Commenting on her own lifelong commitment to jazz, Terri Lyne Carrington defers to Herbie Hancock and Wayne Shorter, musicians who, she reminds us, have said that they "are not playing music, but are playing life."  Indeed, her own music embodies profound lessons about our social and personal lives, about the histories that produce us and how we might free ourselves from these histories and simultaneously carry them forward.  ‘Jazz Is A Spirit’ conveys Terri’s complex engagement with tradition, which involves a deep respect for those who came before her combined with innovative challenges that chart new territory. As the master drummer Papa Jo Jones speaks during the second of Terri’s two stunning drum solo compositions on this disc, he evokes his own contemporaries, musicians who have passed on, and issues a warning that future roads – the freedom roads Terri has chosen to take – will never be easy.
Terri Lyne Carrington developed and honed the skills that now identify her as one of the world’s great contemporary jazz drummers while playing during her youth with musicians like Clark Terry, Oscar Peterson, Rashaan Roland Kirk, Dianne Reeves and later performing with Pharoah Sanders, James Moody, Cassandra Wilson, Lester Bowie, and Stan Getz. For the last fifteen years, she has forged an impressive career working with her own bands, as a sideperson (with contemporary artist Al Jarreau and David Sandborn, as well as great jazzmen like Wayne Shorter and Herbie Hancock), as a composer, and producer. In the process she has staged exciting encounters between the traditional and the avant-garde, between the classical and the popular, between jazz, funk and rock.
‘Jazz Is A Spirit’ reiterates her refusal of strict categories ("Perpetual moments of pure creativity, jazz is abandonment within boundaries, the logical undoing of what you think it’s supposed to be.") In the tradition of drummers like Max Roach and Jack DeJohnette, Terri powerfully anchors the rhythm section and at the same time liberates the drum from it to lead the journey. After Herbie Hancock, Kevin Eubanks, Gary Thomas and Bob Hurst join her in a haunting tribute to Wayne Shorter, the drum emerges as the "journey agent" leading the way from East to West, from the past through the present and into the future.
By now Terri Lyne must be utterly weary of the trivial characterizations of her music that express an awe entirely related to her gender. Even when she was very young, and Dizzy Gillespie said "oooowee Man, she’s mean! She’s good, man! That little girl can play!" he was not necessarily suggesting that he would expect better playing from a boy. As the music on this disc makes entirely clear, she has significantly transformed the way we think about jazzwomen, and thus also, how we think about jazz. Jazz is a spirit and thanks to Terri Lyne Carrington, that spirit is extricating itself from its exclusively male history.
Recently, there has been much conversation about jazz and democracy. The leading participants in that conversation would do well to listen carefully to Terri Lyne Carrington. Her music says it all.
Angela Davis