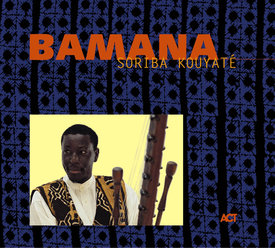 The Paris - Dakar connection has a long tradition, and it is high time the direction was reversed; not by the way of some sandy trail, by the way, but on untrammeled musical paths. As a wanderer between worlds, the musical adventurer Soriba Kouyaté has brought new sounds out of Dakar to Paris, and together with his fellow French musical compatriots, has transformed West African melodies and songs into what can be called jazz in the broadest sense of the word. Kouyaté’s instrument is the kora, the West African harp: 21 nylon strings and body out of a dried calabash (a large squash) covered with tanned calfskin - an instrument that has been unmistakably gaining ground in non-African music in the last years. The history of the kora dates back to the thirteenth century and the ancient kingdom of Mali; it is the instrument of the griots, a stratum of society that had the task of advising and entertaining the king and the Mandingo aristocracy. Soriba Kouyaté comes from a family of griots originating out of Mali. As a traditional griot, Soriba’s father played at parties and festivals - and passed on the art and philosophy of the kora to his son. But Soriba wanted more: "My dream is to show the African world that you can play anything on this instrument, - and to once again show everyone else what we have long known: that music has no boundaries".

Born in 1963, Soriba Kouyaté is not only a modern griot, he is also an obstinate Rebel. Undeterred by all the knowing smiles and negative reaction, he transposed guitar techniques such as plucking and slapping the strings to his kora, mounted a pickup and an extra peg so that he could quickly re-tune the normally pentatonic-tuned strings, and extended the traditional kora repertoire to include classic music, funk, and jazz.

Soriba Kouyaté’s single-mindedness and inquisitiveness brought him together with the musicians with whom he could realize his ideas. The French producer Philippe Gaillot is both fascinated by the West African songs and at the same time has the needed distance to carry the music further into new dimensions. Drummer Joel Allouche enjoys doing away with the borders between ancient song forms and modern experimental music, and saxophonist and flutist Didier Malherbe enriches the close relationship between African and Afro-American music with the European component. Together this band succeeds in defining a new musical route: out of the villages of Mali and Guinea on to Dakar, Paris, and the whole world.