Solveig Slettahjell
Trail of Souls (with Knut Reiersrud & In The Country) 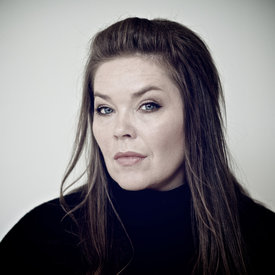 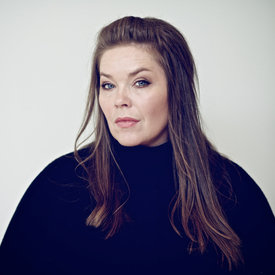 “Connecting the unexpected” is the motto of Jazz at Berlin Philharmonic, a concert series curated and produced by ACT label boss Siggi Loch, which began in December 2012. A carefully selected unifying theme runs through each programme, alongside imaginative juxtapositions of musicians brought together specifically for the occasion, in some cases for the first time. This formula has not just proved a hit with audiences; musicians have also taken to it with a particular zeal. The artists and the spectators who attended the ‘Norwegian Woods’ edition of the series in March 2014 experienced an amazing evening. Loch had assembled the A-team of Norwegian jazz, and created the unexpected by combining them with a guest artist from a different musical realm:

Solveig Slettahjell was one such artist welcomed back into the fold. The ACT label released her early albums, establishing her international reputation as one of Europe’s leading jazz vocalists. Here she was partnered up with In The Country, the piano trio involving her close friend Morton Qvenild, pianist, sonic explorer and also a member of Solveig Slettahjell‘s Slow Motion ensembles. The real surprise that evening, however, came from adding the blues guitarist Knut Reiersrud. He had been on Siggi Loch's radar for quite some time, and on this occasion was having his first ever meeting with Slettahjell and her crew. It turned out to be an ideal combination. The evening was a celebration of everything that had made the Nordic sound so attractive and successful for many decades. On the one hand there was the elegiac, bluesy side, inspired by the spirit of indigenous folk music; on the other the electronic, the rhythmically daring and the experimental.

The participants in ‘Norwegian Woods’ were certain that, somehow, they needed to continue and develop what they had started. Above all, the earthy blues guitar of Reiersrud, with its ethnic influence, had been a revelation all round. Solveig Slettahjell, although signed to Universal, came up spontaneously with the wish to record a studio album with these musicians. Loch already had a suitable idea and concept in his mind's ear, and suggested that they might link the American gospel and spiritual traditions with the Norwegian sound aesthetic under the banner of “Trail of Souls.”

Then followed a huge amount of careful preparation and several rehearsals in Morten Qvenild's private studio, after which all the musicians ended up in the celebrated Rainbow Studio in Oslo to give the original idea a definitive shape. All eleven tracks, with the exception of the final number, a song composed by Reiersrud, are blues and gospel classics in the broadest sense. There are three from stars of pop and soul music - Bill Withers “Grandma's Hand”, Peter Gabriel's “Mercy Street” and Leonard Cohen's “Come Healing” - but beyond those the others are the kind of tunes only familiar to initiates such as Reiersrud. “We did all rummage through our record collections and chose a few old work songs and spirituals together,” says Slettahjell, “but Knut is the really knowledgeable one among us.”

This is something Reiersrud has already proved completely convincingly on his debut album on ACT, “Tears Of The World,” which he made with the amazing blues singer Mighty Sam McClain. Sadly, McClain passed away on 16th June 2015, at the age of just 72, shortly before the album was released. The procession of songs on “Trail of Souls” takes in, for example, the emotional traditional song “Sometimes I Feel Like A Motherless Child,” and that staple of gospel church services, “His Eye Is On The Sparrow,” and the memorable “Don’t Feel Noways Tired” by the King of Gospel, the Reverend James Cleveland. From older pieces by Blind Willie Johnson, James Anderson and Richard M. Jones – with the evergreen song “Trouble in Mind” - the selection comes up to date with the song “Is My Living In Vain?” by Elbernita ‘Twinkie’ Clark, a gospel star and two-time Grammy winner.

All the songs here are given a brand new identity by being taken at a much slower pace than is traditional. Solveig Slettahjell's completely individual soft voice savours every detail of phrasing. Combined with Knut Reiersrud's well-judged voicings, which glitter with their metallic sound, the whole effect is mesmerizing. Morten Qvenild and his trio produce surprising rhythmic accents and a whole panoply of sounds, all the way from wood and clay over spherical surfaces to tough drum'n'bass beats. These musicians' outstanding creativity and their sense of fantasy have shown once again that they truly are Norse Gods.