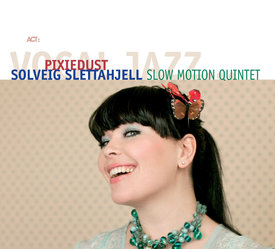 "Slowly does it" is the theme of Solveig Slettahjell, yet another amazing singer from Norway. For many years, we have been surprised by the immense jazz talent to come out of Scandinavia. Although one might think that this flow of consistent creativity must surely slow down, suddenly at the north German festival JazzBaltica 2004 a new star was born: Norwegian singer Solveig Slettahjell (pronounced: Sul-vay Shlet-I-Yell). She cast a spell over critics and public alike: according to magazine "Jazzthetik" Solveig Slettahjell was the "sensation of the festival". And leading German paper Frankfurter Allgemeine described the show as follows: "her performance was a unique immense adagio, that seemed as if she had studied with either Sergiu Celibidache or Glenn Gould through its stretching of melodies and the sounds which seems to unlock concealed undertones."

In Norway, Solveig Slettahjell has for some time been considered one of their most celebrated jazz singers. After studying music at the Oslo Music Conservatoire she began her career in the early 90s, mixing country, jazz standards and Norwegian folk songs, with the odd song by Prince or Tom Waits thrown in. Over time Solveig’s ambitions have developed considerably. In the vocal ensemble vonDrei and Kvitretten she has developed her own experimental style. A sort of onomatopoetic technique, in which she breaks up syllables and words, squeezing, extending, shortening and working them harmonically so as to create an unmistakable soundscape. The principle of taking every song to the skeleton in slow tempi is her indispensable approach.

In the Spring of 2005 she won the Spellemannsprisen, the Norwegian equivalent of a Grammy, for her second album Silver. The jury must have fallen for Solveig’s totally unpretentious and unique approach to jazz standards such as Cole Porter’s "What Is This Thing Called Love" or Jerome Kern’s "Looking For The Silver Lining".

On Pixiedust, her debut album on ACT, to be released in early 2006, Solveig Slettahjell goes one step further, working the principal of slowness to perfection with the "Slow Motion Quintet" – and could there be a more appropriate name for a band?

The art of slowness – the ability to take your time, to slow down your pulse, to follow your own rhythm… In 1983 Sten Nadolny challenged the fast-paced restlessness of modern society in his best-selling novel "The Discovery of Slowness". The Slow Motion Quintet demonstrates how suggestive and sensual, how multi-faceted and surprising sounds and texts can be, when they are developed within the context of a deliberate serenity and tranquility. Nadolny has shown that slowness acts as a magnifying glass: the view is sharpened, because slowness sees more. – Solveig Slettahjell teaches us that slowness also hears more and that there can be more tension and meaning in the delays, the rests, and in fact, even in silence itself than in the hustle and bustle of daily life.

"Pixiedust" is an album of both quiet flowing sounds and emotions. The range of sounds spans interpretations of ballads through to excursions into the avant-garde, which demonstrate the influence of her mentor and former teacher, Sidsel Endresen. But she is no less effective in taking a piece by American songwriter John Hiatt and making it a sublime experience.

Without doubt Solveig Slettahjell justifies her unique position among the jazz singers of her generation. With the wonderful trumpeter Sjur Miljeteig, Morten Qvenild on piano, Mats Eilertsen on bass und drummer Per Oddvar Johansen she defines the term "jazz singer -songwriter": using autumnal harmonies and clear structures Solveig’s music positions itself clearly in a space both foggy but also transparent, as if she could at any moment dissolve.

The silences on this album are as significant as the notes that are sung and played. "I try to reach a place where the details can come to life but seem economical", explains Solveig. "Because I sing the text relatively sparingly, the individual words take on greater importance. I thus choose them with great care and watch out that they fit well into the whole flow of the music. Silence is basically a really active space, which allows a great deal of movement."

She achieves this with the greatest feeling. Sometimes the pieces seem to focus on the tiniest musical details or are ordered around lyrical incursions. And the sparse lyrics also form the structural basis of the compositions on "Pixiedust" (which incidentally refers to Tinkerbell, the fairy in Peter Pan). The album includes songs in a clear verse form as well as free structures, with improvising and interactive schemes. Nowhere is this more clear than in the final piece, an interpretation of the Disney classic "When You Wish Upon A Star": Solveig sings the first lines simply as if a poem to the tender backing chords of an electronic distant piano, before a floating rhythm of the piece begins to appear.

Pixiedust. Something which can cast a spell on everyone – and Solveig Slettahjell can achieve this in abundance.