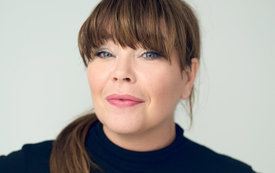 Solveig Slettahjell (pronounced: Sul-vay Shlet-I-Yell) was born in Bærum near Oslo in 1971 and grew up in the small town of Orkanger near Trondheim. As her father was a pastor, she grew up in church. She sang in choirs from the age of 7 and began accompanying various youth and gospel choirs on the piano from the age of 13. She also sang and played her own versions of hymns, negro spirituals, Norwegian religious folksongs, as well as her own compositions.

Solveig studied classical piano and singing at a secondary school for music in Trondheim, before going on to jazz studies at the Norwegian Academy of Music in 1992. Here she met Sidsel Endresen, who was her teacher from 1993 and until Solveig finished her master’s degree in 2000. Her final exam consisted of a thesis on the rhythmic aspects of phrasing and a concert, which was the beginning of the Slow motion concept.

At the Academy Solveig met the pianist Håkon Hartberg. Together they formed the Slettahjell/Hartberg Duo. The duo’s repertoire consisted of their versions of country songs, jazz standards, Norwegian folksongs, children songs, music by Prince, Tom Waits and others. The Slettahjell/Hartberg Duo was Solveig’s most important musical project until 1996.In 1995 Solveig joined a band called Squid, which worked with their own original material based on soul, acid-jazz, and funk music. They did many concerts until the group disbanded in 1999. Squid recorded one album, "Super", in 1998.

In 1997 she joined the Norwegian experimental vocal quartet Kvitretten. The group consisted of the female jazz singers Eldbjørg Raknes, Kristin Asbjørnsen, Tone Aase and Solveig. Their repertoire was mostly music written for Kvitretten by the group members and by various Norwegian contemporary jazz composers. The quartet toured Finland, Germany and Sweden as well as Norway and collaborated with various musicians, vocal groups and poets until they separated in 2002.Solveig recorded two albums with Kvitretten; "Everything turns" (1999) and "Kloden er en snurrebass som snurrer oss" (2002) with Norwegian poet Torgeir Rebbolledo Pedersen.

Vocal ensembles have played a big part in Solveig Slettahjell’s musical work. She worked in the trio vonDrei for three years. vonDrei focused on classical contemporary music and the crossover to improvised music. She also worked with a larger vocal ensemble called Trondheim Voices with, among others, Eldbjørg Raknes and Live Maria Roggen (from Come Shine).

In 2002 Solveig was part of Sidsel Endresen`s project Living Rooms, written for the Norwegian jazz festival Nattjazz. In December 2005 she will work with Sidsel Endresen again on her vocal work for four singers written for the "Norwegian Voices" concert in London.Solveig Slettahjell has also contributed to various recordings, such as Jon Balke`s "Batagraf" (ECM 2005) and Friko, "Burglar Ballads" (C+C Records 2003) with trumpet player Sjur Miljeteig (Slow motion quintet) and drummer Peder Kjellsby (who wrote six of the songs on Pixiedust).

Teaching.
Solveig Slettahjell has been a teacher of jazz singing for ten years. She has been in charge of the jazz singing lessons at Agder University College since 1997 and she has taught jazz singing at the Norwegian Academy of Music since 2000.