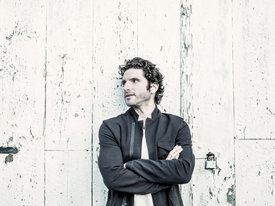 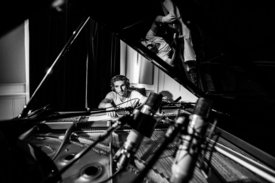 "I always associate visuals with music - and music with visuals," says New York based, french-born pianist and composer, Romain Collin. From the very first note on his ACT debut, Press Enter, his music creates evocative moving pictures which cast a spell on the listener. Vivid musical storytelling is at the core of Collin's vision. His compositions, built around powerful melodic themes, fascinate with their far-reaching dynamic and emotional range.  Alongside drummer Kendrick Scott and bassist Luques Curtis, Collin's music moves seamlessly between dramatic crescendos and subtle ensemble interplay, whilst all at once creating striking imagery for the listeners.

Romain Collin first came to the piano at an early age through classical music. Shortly thereafter, he discovered Oscar Peterson, Erroll Garner and Herbie Hancock, which unearthed a passion for jazz. After visiting New York for the first time at the age of fifteen, Collin made a vow to someday call this place his home. In 2001 - soon after his 20th Birthday - Collin took a major step towards his goal when he took up a scholarship to attend Boston's renowned Berklee College of Music. Romain was then accepted the highly coveted Masters Program at the Thelonious Monk Institute of Jazz in LA, after auditioning in front of his musical heroes, Herbie Hancock, Wayne Shorter and Ron Carter.  Soon after, Collin got the chance to tour Vietnam and India with his mentors, of which recalls: "It was a unique opportunity not only to get to know them first hand as musicians, but also as human beings. We would all spend a lot of time together, go sightseeing before playing big shows where I would trade fours with Herbie! He's one of the reasons I became a pianist in the first place, so that was an unforgettable and incredibly formative experience."

After graduating from the Monk Institute, Collin fulfilled the dream of his youth and moved to New York City. On life as a NY musician, Collin says “...what makes New York special is its sheer intensity.  There are so many amazing musicians on the NY scene that I am lucky to call my friends, and who are constantly inspiring me. Nothing really ever sits still here - it's all growth and discovery.”

Since moving to New York, Collin has rapidly made a name for himself, recording alongside the likes of Mike Stern, John McLaughlin, and Christian McBride, whilst also releasing two critically acclaimed albums as leader: The Rise and Fall of Pipokuhn (2009) and The Calling (2012). NPR (National Public Radio) calls him "a visionary composer, an extraordinary jazz pianist and a very bright young rising star in the jazz world", while The Boston Globe named him as being "among the leading lights of a new breed of jazz players". Meanwhile, Collin's flair for creating music with a strong visual element was given further expression over the course of several award-winning movie scores.

Press Enter merges Collin's influences into one cohesive and unique artistic vision; blending contemporary and traditional American jazz with European classical music and film scoring, framed within a modern production sensibility. The album title is indicative of Romain Collin's singularity of vision and uncompromised dedication to his path, qualities exemplified by the great Wayne Shorter. Collin remembers "While I was in India with Wayne, we had a discussion about having big plans - in life, or in music - but oftentimes not really acting upon them. Wayne then paused, and said to me "PRESS ENTER!". Then he left...but that stayed with me."