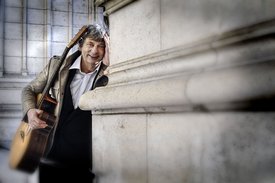 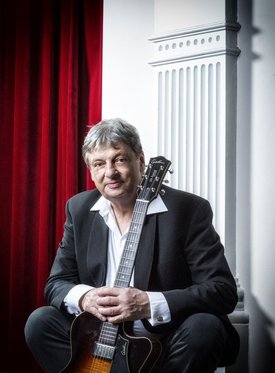 Music composed by Philip Catherine
except 01 by Jean-Claude Petit

Philip Catherine could so easily never have been born. His maternal grandfather, Mr. Brennan, a member of the first violin section of the London Symphony Orchestra, was supposed to travel to New York on the fateful maiden voyage of the Titanic in April 1912. He had booked his ticket, but by the time he got to Southampton, the ship had already sailed without him. Not long thereafter, Philip Catherine's mother came into this world, and Catherine himself was born on the 27th of October 1942.

This story, which gained the status of myth in his family, helped his mother to instil a love of music in him. Now, at the age of nearly 73. Philip Catherine has been able to fulfil a long-held wish to have his music performed with a large orchestra, the Orchestre Royal de Chambre de Wallonie, conducted by Frank Braley. Nine arrangers made orchestral versions of his tunes, the guitarist/bassist Nicolas Fiszman was tireless in helping with the preparations, which enabled the new work to receive its premiere after just six hours of rehearsals, in the Brussels Jazz Festival on January 13th 2015.

“I was so entranced by the sound, by the beautiful new cloak which my tunes had been given to wear, I missed my entrance in “Transparence,” says Catherine. “I just sat there for four bars, listening instead of playing- that's something which has never happened to me before.” Catherine re-captured those four bars in a session afterwards, and that was the only tune which needed to be patched in the studio. Everything else is exactly as it was played and heard in concert on January 13th. “We had never imagined that we would make a CD of this concert – mainly because we had had so little time to prepare it. But the Flemish TV station VRT-Canvas had made a complete recording, and when we heard it played back, we all thought: Hey, this has to be a CD. “

Ever since the 1970's, Philip Catherine has had a decisive influence on the sound of the guitar in jazz. This period – four decades – has also been the time during which the guitarist has worked together with Siggi Loch, which made his the appearance of first CD on ACT feel like such a natural step. That album “New Folks,” a duo album with the bassist MartinWind, is now followed by “The String Project - Live in Brussels.”

Philip Catherine is one of the finest exponents of the melodic way of playing the guitar. Having been schooled in the music of Django Reinhardt, Catherine took his playing to another level in his duo with guitarist Larry Corryell, and several albums which he made with Chet Baker constitute a major recorded legacy.

“With this string project, I didn't feel that I wanted to prove anything to anyone, so I consciously avoided playing anything showy. The sound of the arrangements, plus what the orchestra and the conductor were creating from them, was all so fascinating, that my only ambition was to put myself at the service of the project, to use my instrument and my abilities to complement and to enrich the overall sound.” That said, Catherine's highly individual sound is instantly recognizable, whether he is in a 'pas de deux' with the violins (in “Philip a Paris”) or with the cellos (in “Toscane”). “I spoke about complementing, but that doesn't mean that I blend in to the point of being unrecognizable. Quite the opposite, in fact. It was important to me that the orchestra should be able to maintain its own identity - and that my band should too.”

Catherine's quartet was integrated into the project, and assures that there is variety and contrast. In “Transparence” the band temporarily takes on the leading role. There are fascinating duo sounds alternating with the full orchestra, for example in “December 26th”. Catherine's co-organizer Nicolas Fiszman takes the bass part in “Virtuous Woman” and plays the second guitar in “Isabelle.” The alternation of sounds is always subservient to the idea of hearing the full orchestra.

“The String Project - Live in Brussels” brings classical music and jazz together – you would never know they had spent time apart.