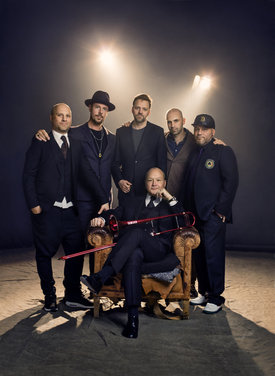 Mr Redhorn, Nils Landgren would never, ever mess with a good recipe.

Unbreakable opens with the title song, Nils Landgren’s own composition. It  begins with an unmistakeable guitar intro by Detroit funk legend Ray Parker Jr. (for the occasion an “Honorary Funk Unit member”) a funky riff that sets the pace for what’s to follow; a nonstop funk blowout. The Funk Unit rhythm section is tighter than ever before and lays down a groove like no other band. The horn arrangements (by band member Jonas Wall) are exquisitely precise and the process of arranging, mixing and performing they have developed over the years is unique and totally their own. If you add to that an outstanding trombone player/lead vocalist you have one of the most dynamic groups of musicians ever to hit the stage in Europe. Some funk, some jazz and some straight-out party music, and when the likes of Ray Parker Jr., Randy Brecker and Tim Hagans are willing to come along for the ride, it’s bound to keep the recipe going and some good music playing. The title is important to Nils and marks something of a turning point in the history of his band: “Throughout all our years together, there have been countless moments of great joy and laughter, but also times when we had to fight to stay on the right track. Remembering the highs always helped us to face the lows and to get back up on our feet. The love for the music and for each other has always won and always will. We are unbreakable”.

Nils Landgren, one of the most successful European jazz musicians ever, has received a plethora of jazz awards and other honours, including the Swedish Grammy for “lifetime achievement” and the Royal Swedish medal ”Litteris et Artibus” from the hands of H.M. King Carl XVI Gustaf of Sweden, for his outstanding achievements.

When ACT Music founder Siggi Loch, first heard Landgren play in 1994, the band was called Unit. ”Why don’t you call it what it is?", Loch said, and from that moment Funk Unit was born.

The first album on the - then young - ACT label would be Live in Stockholm, recorded in summer 1994 with Maceo Parker as special guest, and that would soon be followed by a string of Funk Unit records released on ACT. Some of the notable highlights are the Cannonball Adderley tribute Paint It Blue (1996) featuring Bernhard Purdie, Michael and Randy Brecker. Funky Abba (2004) and Funk For Life (2010) supported, together with Doctors without Borders, a project to support children and teenagers with their music in Kibera, one of the biggest slums in Nairobi, Kenya.

Randy Brecker, trumpet player. Six-time Grammy award winner. Started his career as a member of Blood Sweat and Tears, and Art Blakey’s Jazz Messengers. His collaboration with younger brother Michael led to some of the most notable albums in the fusion genre, Brecker Brothers.

Tim Hagans, jazz trumpeter, arranger, and composer from Dayton, Ohio. USA. Three-time Grammy Nominee. In his early years he toured with Stan Kenton and Woody Herman. Among other artists Tim has recorded with Steps Ahead, Maria Schneider, Joe Lovano.

Unbreakable was recorded in November 2016 in the legendary Atlantis Studios in Stockholm, also the recording site for artists like ABBA, Scorpions, Elvis Costello and Esbjörn Svensson.