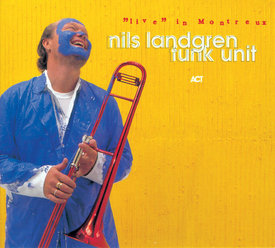 Recorded by Manu Guiot at the Miles Davis Hall in Montreux on 24 Track Sony-Digital PCM 3324A on July 17, 1998
Mixed by Jan Ugand at Stocksund Recording
24 Bits Mastering by Peter Dahl at Cutting Room Stockholm
Produced by Siegfried Loch

There are certain magic moments . . . The musicians go on stage, count off the first number, and all at once there is that special feeling of excitement in the room that turns a concert evening into an unforgettable experience. Thanks to the intelligence of an experienced producer who had the foresight to turn the tape machine on and then just let it run, this fleeting moment of impulsive, fresh jazz and funk has been captured for our permanent pleasure. Siegfried Loch said of his newest surprise package that, "We had no intention of making a CD from this recording, but the concert was so unbelievable good that we had no other choice." Added Claude Nobs: " There was ABSOLUTE FUNK in the house tonight. "

Since 1983, while working in various jazz-rock formations, the Swedish trombonist Nils Landgren has dedicated himself to commingly jazz with soul and rhythm and blues. He formed the Funk Unit in 1992, and began to put his concept into practice. The CD "’Live’ in Stockholm" brought Landgren’s Funk Unit into the fore as an international acclaimed group. The many concert dates following his successful award-winning 1997 C D "Paint it Blue" (ACT 9243-2 ) allowed Nils Landgren and his Funk Unit the playing time needed to make the next step.

On July 17th, 1998, Landgren walked self-confidently onto the stage of the Miles Davis Hall as part of the festival’s ACT Night; it was the first time in the history of the renowned Montreux Jazz Festival, that artists exclusively from a German label had an evening for themselves to let loose in. Landgren commented about this special moment in his musical career: " Ever since I heard Les McCann"s and Eddie Harris’ legendary Montreux recording 25 years ago, it has been a dream of mine to play at Montreux. "A combination of admiration and challenge led Landgren to put together a gripping , no-frills program that would move jazz-funk fans from head to toe.

The results, "’Live’ in Montreux", is an inspired combination of precision and discipline, humour and a joyful, boisterous, free-wheeling enthusiasm.

Tracy, with it’s crowd-pleasing, smooth, in-the-groove, medium-tempo funk, recalls the classic period when trombonist Wayne Henderson and the Crusaders reigned over the jazz-funk kingdom. Nat Adderleys Walk Tall, with its clever hooks and sharp arrangement, has a "party" quality which offers Landgren enough room to strut his stuff, as he reels of a series of powerful virtuoso solo passages. The Funk Unit’s version of Joe Zawinul"s much-copied classic Mercy, Mercy, Mercy is a fresh, at times tenderly ballad-like, at times irascibly bluesy, rendition of the original. In Ack Wärmland du Sköna, the joke’s on the listener, as Landgren uses the contrivances of rock and the avant-garde with anarchic glee to dismantle the tender Swedish folk song. As encore, trombonist Landgren and keyboard player Esbjörn Svensson came up with Gärdebyläten, a remarkable gem out of their "Swedish Folk Modern" ( ACT 9257-2 ) period.

"‘Live’ in Montreux" is a unique and vital document of one of the world’s best funk groups. lt is also another shinning piece in the brilliant mosaic of Nils Landgren’s musical career.