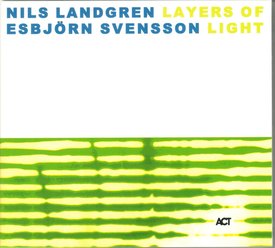 All music has its roots in folklore. In some playing styles this is easy to recognize. In others hundreds of years of cultural development and change have effectively sublimated those roots. Stripped of ornamentation and structural artifice, however, the foundation remains the same. The melodies and structures that affect and influence people in their day to day lives remain the basis of musical knowledge and experience. They are the blueprints of the collective consciousness and a challenge to the creative spirit. Individuality along with innovation in its surprising, unconventional workings emerge as a contrast to those folk origins. So is the secret art by which the balance between memory and fantasy, between folklore, tradition, and improvisation is weighed.

Nils Landgren was born in 1956 and grew up with the music of his father, a jazz cornetist, and the church music of his grandfather, a pastor. He never lost his strong affinity for his own musical heritage.

Esbjörn Svensson, born in 1964, didn’t want to play folk music at first. At home with the music of Chopin, Ellington, or disco-pop groups such as The Sweet, the pianist had first found his place in the competitive music scene in Sweden. His trio was a success, and in his homeland he was voted jazz musician of the year in 1995 and 1996. The first sprinkling of jobs became a steady flow. Svensson proved himself in the bands of his friend Nils Landgren. The music was about funk  and soul, occasionally pop, and in the main, classic jazz. But not folklore.

It was through the influence of Landgren and Svensson’s former teacher Bengt-Arne Wallin, who recorded the landmark album "Old Folklore In Swedish Modern" back in 1962 (ACT 9254-2), that Svensson and Landgren were inspired to make a duo album centered around folk songs. In August 1997 both went into the studio and with only trombone and piano recorded Swedish Folk Modern (ACT 9257-2). Their improvised treatments of the classic songs of the folk culture not only impressed the public; it brought praise from the press. Svensson and Landgren had created more than just a few impressions in duo. Discarding any sort of large conceptual superstructure, they had continued what Jan Johansson’s Jazz på Svenska and Bengt-Arne Wallin had begun in the early sixties and what has since become a major force within the inner workings of European jazz.

The time after Swedish Folk Modern was hectic and exciting. Nils Landgren’s Funk Unit advanced to the position of a celebrated festival act. Svensson’s own trio, EST expanded beyond Scandinavia’s borders, where the band’s fortunes skyrocketed. Inundated with jobs, the musicians finally found the time to once again get together in December 1999 in Oslo’s Rainbow Studio. It would be a meeting full of exceptional jazz energy. Even more than the first time, they would rely on the force of reduction. Moods would be suggested, left open. Melodies worked out in simple clarity.  Delicate variations supplemented and amplified both the original and traditional motifs of the central musical im- pressions. Layers of Light is an affair of the hearts of two artists who went back to their roots. That makes their music truthful, direct, and authentic in a wondrous way.