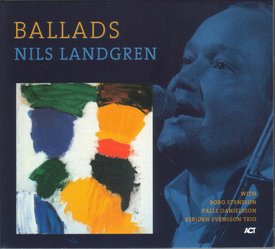 For those familiar with trombonist Nils Landgren and his Funk Unit, a band whose music is rooted in the fertile soil of Afro-American rhythm and blues and jazz, Ballads may come as a bit of a surprise, albeit a very pleasurable one.

After two decades of working with some of the best players in jazz, funk, and soul jazz  trombonist Nils Landgren has earned his reputation as one of the most expressive, forceful players on the international scene. His work with Thad Jones’ legendary big band as lead trombonist, and in combo settings with Jones in the early 80s certified his status as one of the leading jazz trombonists on the European scene. In the years that followed, he worked and recorded with artists that read like an international cross-section of the "who’s who" in jazz, rock, soul, and pop music; The Crusaders, Joe Sample, Herbie Hancock, Gil Evans, David Murray, Bernard Purdie,  Kenny Wheeler, and Eddie Harris are names which intimate the breadth and depth of Landgren’s musical abilities.

Nils Landgren is best known for his Funk Unit, a band that, since its formation in 1992, has gained critical acclaim and a large public following throughout Europe, even making a successful move into the always difficult to penetrate American market.

The Funk Unit’s predecessors range from the gospel-like fervor of James Brown and his former cohort Maceo Parker, to the sophisticated soul of Cannonball Adderely. The band is propelled essentially by Nils Landgren’s explosive virtuoso trombone playing, but another integral part of the music is Landgren’s compelling, emotive singing. The idea that Nils would do a primarily vocal album consisting of ballads is thus not so quixotic as it might at first seem. Nils Landgren’s newest release, his sixth on the ACT label, is actually a step back in time. It was an easy step for ACT producer Siggi Loch to take; the re-release of this 1993 production shows yet another impressive side of this versatile master-musician.

Two of the three instrumental features, J. J. Johnson’s Lament, and Thad Jones’ A Child is Born, are compositions by two legendary jazz musicians. Both, in their own way, have a personal significance. Johnson is the father of modern trombone playing, and in Lament, Landgren, with his silky soft attack, warm, lush intonation, and pristine articulation, pays admirable homage to the master. Working with Thad Jones was Landgren’s first opportunity to work with a major international jazz musician. On A Child is Born Landgren plays with appropriate tenderness and sensitivity.

Nils Landgren’s vocal style, rather than harkening back to the classic styles of Sinatra, Tony Bennett, and Mel Torme, has a more contemporary tinge. His rich, emotive tenor voice has more a hint of the influences of Aaron Neville, Stevie Wonder, and Sam Cook melded into his own personal style. The vocal ballads encompass such standards as There Will Be Another You, Here’s That Rainy Day, Everything Happens To Me, a favorite vocal piece of jazz trumpeter Chet Baker, and a Latin-tinged version of Killing Me Softly, a piece made famous by Roberta Flack in the 70s and recently resurrected by the Fugees. Eddie Harris’s You Stole My Heart is the single composition not on the original 1993 CD. Landgren recorded it with pianist Esbj_rn Svensson’s trio in May, 1998. Nils played the piece in every concert following Harris’s death as a tribute to the man and his music.

Nils Landgren has assembled a group of sympathetic internationally renowned Scandinavian musicians whose accompaniment and support bring out the breadth and depth of  Landgren’s singing. This is an album that will please and surprise those who are already fans of Nils’ funky side; it’s a recording jazz lovers eager to hear a fresh, new approach to the tradition of the jazz ballad can also dig.

Landgren is part of a long tradition of great jazz instrumentalists who became known as well for their singing talents: Satchmo, Nat King Cole, Chet Baker, and Ray Anderson are a few who come to mind. Nils Landgren states that, "I hope we give the people as much good music as possible. I see my music and myself as a part of the jazz culture. For me, jazz is continual renewal and change; it can’t remain static." With this album, Nils Landgren once again shows that he stands by what he says.