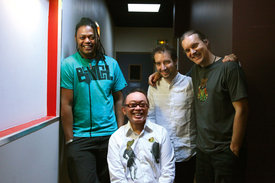 Nguyên Lê takes the title of his latest album from one of his favourite songs of freedom: Bob Marley’s “Redemption Song” sits alongside hits from Led Zeppelin, Janis Joplin, Stevie Wonder, Eric Clapton and the Beatles, whose “Eleanor Rigby” and “Come Together” frame the album - credit where credit’s due, these artists wrote some of the finest songs in recent memory. But Lê takes the liberty to unearth these icons of pop and rock history from their dust (or gold) covered depths and brings them to the present day and to the global village, with the help of his own formidable musical prowess as well as many exceptional guests from all over the world who provide support in his band.

Together with Lê, Illya Amar (marimba, vibraphone and electronics), Linley Marthe (electric bass) and Stéphane Galland (drums) form the dynamic basic framework of these transformations, continually pushing forwards rhythmically but remaining easy going and light. The singers Youn Sun Nah, Dhafer Youssef, David Linx, Ousman Danedjo, Himiko Paganotti, Julia Sarr and the percussionists Karim Ziad, Stephane and Prabhu Edouard, Hamid El Kasri and Keyvan Chemirani and the saxophonists David Binney and Chris Speed give each song their own personal stamp. Lê brilliantly arranges these musicians, placing them in suitable yet always surprising situations. On several occasions he converses with his guests, so to speak, with brief self-composed intros which offer the perfect introduction.

As a result, this isn’t an album featuring standard cover versions. Instead, familiar melodies are introduced with great respect to pulsating new sound streams from all over the world. “Music is like a bird. Once it has been released it will fly in any sky. The earth becomes rounder and rounder and invites all cultures to an exchange and to immerse themselves in one another. This leads to the freedom to make these songs one’s own: to still lovingly play the original melodies yet with the boldness of our own arrangements which celebrate the realm of imaginative power and fantasy,” says Nguyên Lê.

These poetic words are not too far-fetched, and this is undoubtedly proven on the album. Here we can hear how the soul of Stevie Wonder’s “I Wish” immerses totally harmoniously in Caribbean-Asiatic sound worlds, and how Janis Joplin’s “Mercedes Benz” rolls along not only Californian but also Indian, Japanese and French paths. Led Zeppelin’s “Whole Lotta Love” is also transformed in to a rousing whirlwind, with the band being led by the eternally and indisputably precise Youn Sun Nah who is here surprisingly rocky and irresistibly intense.

“Come Together” is therefore not simply the last track of the album, but represents what the album is about. With these 15 songs of freedom, Nguyên Lê impressively brings together a wide and previously unheard range of individuals and sounds from various different origins - West merges with East, North with South, great vocals with instrumental virtuosity and the melodic legacy of the past with the sound of the future