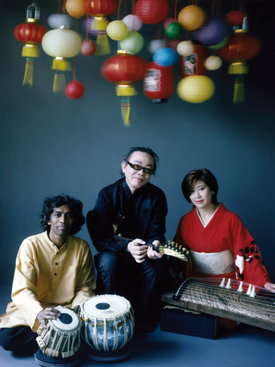 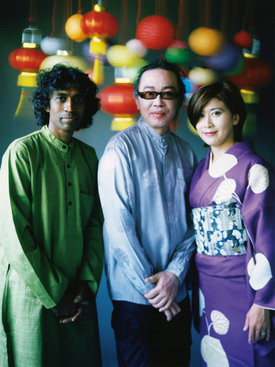 In 1993, the Frankfurter Allgemeine newspaper said of Nguyên Lê’s first appearance in Germany: “There is nobody else that plays guitar like he does!” These words still ring true today, a fact to be heard on his latest release for ACT, Saiyuki. For the acclaimed Parisian artist, new worlds are constantly unfolding and Lê is consistently able to amaze us anew with sound. This is even more amazing because he is already one of the great sonic explorers in the jazz world: one who embarks on flights of the imagination in order to investigate new combinations of sounds. Saiyuki is very explicitly a journey: one from east to west and west to east in, as Nguyên Lê himself puts it, an “Asia without borders”. In trio with the Japanese koto player Mieko Miyazaki and Indian tabla virtuoso Prabhu Edouard, his new CD for ACT takes off on a musical Silk Road that binds diverse Asian worlds together.

Nguyên Lê borrowed the title Saiyuki from the famous novel of the same name (English: “Journey to the West”), written in the 16th century by the Chinese poet Wu Cheng’en, which tells of a monk’s journey to the “heaven of the West”, in what we know today as India. For the guitarist, that literary journey represents a fascinating starting point for his own explorations. Vietnam, India and Japan, the origins of the musicians involved, create a magical triangle in which sounds move toward each other and find new forms, culminating in a scintillating encounter of identities.

And these identities have been altogether doubly formed. As Nguyên Lê himself unites Vietnamese musical tradition with contemporary jazz, in a playing style that is at times completely bluesy and at others seems to emulate the incisively delicate stringed instruments of the Far East, his partners on this CD also share stylistic backgrounds that fan out into several areas. Like Nguyên Lê, both live in France and both are musical adventurers – culturally speaking, all three are insiders and outsiders at the same time.

Koto player and singer Mieko Miyazaki is classically trained for her instrument. While she is also a songwriter and composer for radio and TV shows, she gathered jazz experience while playing, among others, with the Koto2Evans Quartet, which transposed pieces by pianist Bill Evans for the koto. She has also previously appeared with Nguyên Lê on his previous ACT recording Fragile Beauty. A native of India, Prabhu Edouard studied with tabla master Shankar Gosh in Calcutta, and is one of a few virtuosos of that small, yet highly expressive Indian percussion instrument. The tabla, actually a member of the kettledrum family, is played subtly with the fingers, which perform dances of their own and can create a spectrum of sound ranging from gurgling bass tones to metallically resounding high tones. Prabhu Edouard has also worked with jazz musicians such as David Liebman, Marc Ducret und Didier Malherbe.

These three musicians – as well as special guest Hariprasad Chaurasia, Indian master of the bansuri flute – let their musical imaginations run wild on Saiyuki, resulting in a collection of enormously diverse pieces. Whether the composition “Autumn Wind” creates a vast lyrical expanse of finely modulated guitar and delicate flute, or whether a rhythmically driving piece like “Mina Zuki” begins with a country blues guitar, then masses together in a rock-like fashion, only to wind up sounding thoroughly Asian thanks to a flute and koto dialogue – the result is always organic, as if tabla, koto and modern electric guitar had been played together in the same band since prehistoric times.

The listener can let himself be carried away to fascinating landscapes. Sometimes, above these landscapes, there seems to be an ethereal breeze; at others they shine with the clarity of a morning sunrise, and there is something mysterious and magical about them again. And yet these moments still have the capacity to surprise us; accents of electric guitar burst suddenly in the middle of graceful melodies, or we hear the title spoken as the song progresses, whereby we unexpectedly learn that “Sangam” in English means “joyful encounter”.

A joyful, rewarding encounter: this translation sums up the feel of these recordings, for the simple reason that it is the sheer joy of playing and exploring each member of the group’s musical qualities that define Saiyuki as a whole. The compelling east-west-east tour through an Asia made accessible to jazz leaves an unexpected assortment of impressions. It doesn’t matter whether the songs titles are about food, the deities of one Asian realm or another, or simply the enchantment of the encounter: in Nguyên Lê’s Asian world-jazz, all these things and more come together easily.