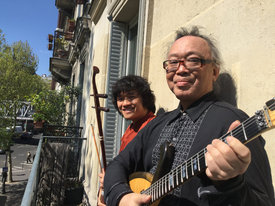 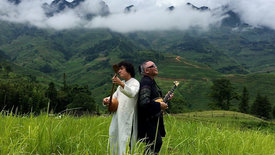 Nguyên Lê's new album, which will be released on ACT on January 2017 features a new collaboration - Hà Nôi Duo - with Ngô Hồng Quang.

Nguyên Lê defines what lies at the heart of this collaboration: “Ngô Hồng Quang and I are two Vietnamese musicians whose upbringing and musical education and evolution could not have followed more different paths. And yet we have found that we both share common goals: to express and to share the soul of Vietnam with the wider world, to bring together the roots and the future of Vietnamese music. Vietnam as a country is evolving so fast and so brilliantly, its population is full of so much youthful vigour, curiosity, and a deep hunger to learn everything possible from the West. But at the same time, many people feel a vital need never to forget the past.”

“In this album we - as musicians - live through those paradoxes. The album shows the diversity of what Vietnamese music can be today. Like the country itself, this album aspires to be colourful, plural and moving. We want to excite the ear and engage the intellect – and to bring the listener closer to the soul of Vietnam.”

“Quang is a great example of what I would call the 'traditional musicians of today.' Virtuosos from elsewhere who carry & embody the tradition of their country at its deepest level. But because they are young, they are also impressively open. They want to share their identity with the whole world, to learn from the West without denying their past. They can play contemporary music on their traditional instruments. They can integrate into new musical situations while remaining themselves. Being modern doesn't replace tradition, but brings tradition to a new level of liveliness.”

This is Nguyên Lê's 18th album in the role of either leader or co-leader and a continuation & development of several previous CDs on ACT: five albums about Vietnam, recorded with traditional singer Huong Thanh, TALES FROM VIET-NAM (1996), MOON & WIND (1999), DRAGONFLY (2001), MANGUSTAO (2004) et FRAGILE BEAUTY (2007); the meeting of traditional music virtuosos around an 'Asia without borders' concept, SAIYUKI (2009); HOMESCAPE (2006), the intimate experience of a duo transcended by home-studio magic & the re-composition process over spontaneous improvisations.

Nguyên Lê explains more of the background: “With this 'Asia without borders' concept in mind, it seemed obvious to me that I should invite back my partners, my musical brothers & sisters, from those previous two albums.”

“So, what an absolute pleasure to welcome back the grace of Japanese koto player Mieko Miyazaki, the rhythmic intelligence of Indian tabla player Prabhu Edouard as well as the supreme melodic gifts of Sardinian trumpet playerPaolo Fresu!”

“My previous 'Vietnamese' records with Huong Thanh were different from this new one. They were very much based on re-written traditional songs. This was music I wanted to share, but in a way that would chime with western ears. After nearly fifty tunes handled this way, the emphasis has now shifted. These are personal, original compositions, but they are also written as a in a way that extends and prolongs our combined musical heritage.”

About the individual tracks, Nguyên Lê writes: In my tune “Five Senses,” a melody written by a jazzman is performed and becomes transformed by the timbres and accents of traditional Asian instruments.
“Tình đàn,” is written by Quang, inspired by the Tày mountain minorities, and is tinged with new colours by my North African-sounding acoustic guitar, which reaches back to “Maghreb & Friends”, recorded in 1998.
“Monkey Queen” is another tune of mine, written during the Monkey Têt. Here, two sorts of Đàn Bầu (monocorde) single-stringed instruments are conversing with each other: the opening of the piece is an improvisation on electric guitar with the bent harmonics technique that I learnt in Hà Nôi in 1979; the other is the real Vietnamese traditional instrument, playing a non-traditional melody, later performed on vocals.
“Chiếc Khăn Piêu,” written by Doãn Nho in the 70's, is dressed with a new arrangement in 5 beats (Vietnamese music is always in 2 or 4 beats!) & with an Indian rhythm orchestration, co-written with Prabhu Edouard.
“Muc Ha Vô Nhân,” is a song in the northern Xẩm style, from wandering blind beggars music from 14th century. Here it finds a new Blues brother, this one being surely more North American.

Summing up this album, Nguyên Lê writes: “In this new Hà Nôi Duo, each of our identities stays strong and individual, but each of us also approaches the collaboration with a complete openness of spirit, the desire to soak up and enrich the whole with intricate subtlety. At any moment, this music will raise numerous questions. Is it Vietnamese? Or jazz? Or traditional music, blues, African, Indian... is it written - or is it improvised?”

“Like threads of silk, cultures from yesterday and today weave a complex and diverse beauty. That complexity and diversity are part of the essence of the country of Vietnam, with its millennial roots, its tormented past and future full of hope. They also take us to the heart of life itself .”