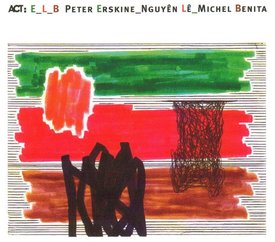 What seldom functions in everyday life is occasionally possible in music "There is no single leader with us. We’re all three on equal ground", guitarist Nguyên Lê commented. He continued, " We have something of a weakness for true democracy". No member of this trio, which was formed in France just two years ago, would presume the attitude "I’m the band"; and when that would be the case, then it would obviously go for all three. Three seemingly unspectacular letters suffice as the signature for this group undertaking: E_L_B. Written out, the initials stand for Erskine_Lê_Benita. And this is certainly everything but unspectacular. Whoever has followed jazz over the last ten to twenty years will give a whistle at these three names.

Drummer Peter Erskine was born in 1954 in Somers Point, New Jersey. Bandleader Stan Kenton had already recognized his talents when Erskine was a seven-year-old taking part in a youth music camp,.  As a member of the group Weather Report in the late-seventies, he became internationally known.  He has worked with musicians such as Maynard Ferguson, Gary Burton, Pat Metheny, John Abercrombie, Marc Johnson, John Scofield and the singer Joni Mitchell. A high-profile band-leader since 1982, Erskine has left his mark with his distinctively subtle style and his ability to play the drums and cymbals at a whisper. His credo is "say more with less", and anyone who has heard Erskine knows what he means.

Guitarist Nguyên Lê, the son of Vietnamese parents, was born in Paris in 1959. He has been a major figure in the French music scene since the 1980’s. Since his appearance at the 1994 Berlin Jazz Fest, Lê has been a known figure on the international scene. The Frankfurter Allgemeine newspaper acknowledged at that time that "no one else in the world" plays guitar like him. With such CDs as Tales from Viêt-Nam (ACT 9225-2), and Maghreb & Friends (ACT 9261-2) he underpinned his calling as an original World-Musician for whom any single category is too narrow.

Bassist Michel Benita was born in 1954 in Algeria. Since his move to Paris in 1981 he has proved himself to be a strong personality on his large, quiet instrument. He has been celebrated as one of the major European discoveries of the 1980’s. Benita’s warm, strong, and above all flexible tone has made him one of the most asked-for side-men. He has worked with the likes of Aldo Romano, Marc Ducret, Martial Solal, Lee Konitz, Dino Saluzzi and Archie Shepp. Along with this Benita has become prominent as a bandleader.

The three musicians have crossed paths again and again on different projects. "Peter Erskine and I had planned to put together a group for a long time", says Nguyên Lê. The first trio appearance with Michel Benita occurred in 1994, and after a meeting at the MIDEM in 1999, the three decided to continue this formation as a working group.

The eleven pieces at hand - four composed by Lê, four by Erskine, and three by Benita - work as a unified whole. At times the music sounds energetically rocky (Pong, Sao Sen), sometimes it’s a loose and bouncy tribute as in Country Boy; sometimes a tremendously lyrical and sensationally quiet-sounding ballad unfolds (Autumn Rose). Considering its short existence, this is an incredibly mature trio. Seldom in jazz is the art of selfless interplay more complete as here. This give-and-take is closely linked, always an integrated whole, always more important than the occasional high-flying solo.

A deeper understanding is hidden behind it: when there is no self-satisfied grandstanding, the music’s worth shines through. Nguyen Lê’s razor-sharp sometimes slightly Far-Eastern-colored tone, the light-handed suppleness of Michel Benita’s bass playing, and Peter Erskine’s sensitive precision that can give the power of an erupting volcano to a pianissimo passage: all are clearly subordinate to the distinctive group concept. Such exciting things are possible when there is no boss to mess up the works.