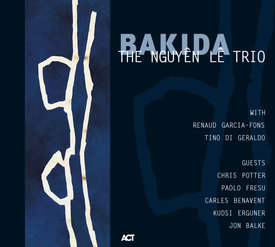 "Unlike the CDs "Tales from Viêt-nam" or "Maghreb & Friends", Bakida does not deal with a specific culture. I rather see it as a synthesis of attainments and emotions, an inner motion that bears so many influences and dreams", is what the Vietnamese-French guitarist Nguyên Lê says about his new work, Bakida.

Bakida is partly the consequence of the guitarist’s musical life up to this present point in time. Nguyên Lê, born in Paris in 1959, and the child of Vietnamese immigrants, has always striven to be versatile. Lê had actually studied fine arts and philosophy;  the musical career of this self-taught musician was jump-started after he was called up to play in the French Orchestre National de Jazz under Antoine Hervé. He went on to work with such world class musicians as Dee Dee Bridgewater, Andy Emler, Carla Bley, Coutney Pine, Gil Evans, and Quincy Jones. He was especially thrown into the spotlight when he replaced Al DiMeola for performances of Vince Mendoza’s flamenco-jazz project, "Jazzpana" (ACT 9212-2), as the project went on the road. The music on his own recordings has taken a different direction every time: on Tales of Viêt-nam (ACT 9225-2), the guitarist respectfully combined the music of his homeland with jazz. On Mahgreb & Friends (ACT 9261-2), Lê’s orientation was mainly on the music of Algeria.

It has always been difficult to categorize Nguyên Lê’s music. Along with Lê’s sheer musicality, much of the attraction and appeal lies within this eclecticism. The youthful forty year old ignores all borders, which led the Franfurter Allgemeine newspaper to attest 1994 after his appearance with Vince Mendoza`s "Sketches" (ACT 9215-2) at the Berlin Jazz Festival to the following: "Nobody plays guitar like him." Actually, it is no surprise that Lê attempts to draw from every musical style and category. While on the one hand he was stamped by the strict tradition-conscious culture of his elders, on the other hand he was continually exposed to  the rainbow multi-culture that is Paris, constantly absorbing, intermixing , and transforming the myriad influences. This is "World Music" in the best sense of word.

Bakida contains 10 pieces filled with vibrant colors and rich contrasts.  One moment the music is meditative, the next moment the listener is struck by its forceful energy. It contains elements of jazz, rock, funk, and classical music. Lê and his fellow musicians undertake a trip that runs from the Mediterranean coast to the South China Sea, effecting unexpected encounters with Turkey, Norway, America, Spain, Sardinia, Algeria, and Lê’s Vietnamese homeland along the way. It’s amazing to what extent the guitarist has molded a homogeneous music out of these diverse elements. The music doesn’t sound artificially constructed or arranged, but rather has a natural, inevitable feeling and flow. As Nguyên Lê says, "May all those colors, accents, and spices gather together in one sincere voice, like a central current flowing through the streams of cultures: West and East - middle and extreme, South and North - radiant and magnetic."