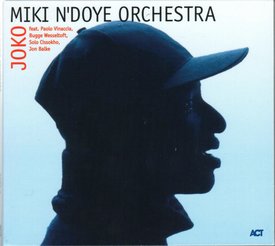 Recorded and mixed by Bugge Wesseltoft and Asle Karstad, at Bugges Room, 2000

On the 12th of March 1944 Miki N'Doye started on the journey that has taken him all the way from the heat and warmth of The Gambia in central Africa to more or less the North Pole - Norway to be exact. Why and how is an interesting story that we'll come back to, but what we have in our hands right now is more or less the result of Miki's journey.

Helge Linaae, a Norwegian cultural worker and musician with strong ties to The Gambia, met Miki in his native country in the middle of the 70's and they put together a group that played for predominantly European tourists. The travel agency that hired Miki and Helge to entertain the tourists was also an important factor in bringing their music back to the tourists' home shore - an 11-day flight on a tiny plane brought Miki to Norway for the first time in 1976. Another important part of Miki's journey had ended - or maybe just started.

Miki brought with him his own brew of music from his home country consisting of ingredients from for example wollof, maningo and jolla among others and a lot of Norwegian musicians, mainly with a background in jazz, were tempted to try to mix their own ideas with what Helge and Miki had brought with them.

"I found the the Norwegian musicians to be very interested in my music and quick learners," says Miki. That's not very surprising when we hear what kind of high calibre musicians he ran into and started his first band with: The Balke-brothers, Erik and Jon, saxophonist and pianist with successful careers for the last 25 years with most of Europe as their working ground, electric bassist Sveinung Hovensjø - an important foundation in many of Terje Rypdal's bands and the very versatile drummer Finn Sletten. The name of that first band was E'olen - which means wake up - and had a very succesful period from its start in 1977 till they disbanded early 80's.

E'olen was succeeded by a new band, Tamma - which is the name of a hand drum. The basic ideas were the same: Miki's African roots mixed with jazz. Jon Balke and Helge Linaae had left the band and the new member was the very expressive trumpeter and vocalist Per Jørgensen. The changes in personnel led to a new sound, and the highlight in the band's career was the cooperation with Ed Blackwell and Don Cherry during Moldejazz in 1984 which also led to a live recording.

"It was fun man", remembers Miki. "Although Don Cherry wasn't at the top of his form at the time, the experience is something everyone that was involved in it will cherish forever. -Ed was very interested in what I was doing and where my music came from."

After the Tamma period Miki put together a new band, Sabba - which means three in the mandinko-language. The trio consisted of his old friend Helge Linaae on percussion and Miki's fellow countryman Demba Jobathe on the traditional African string instrument kora. They played approximately 150 school concerts all over Norway, and Sabba were definitely important in telling new generations about exciting cultures and music.

For most of the 90's Miki has played freelance in a lot of different musical situations. "But everybody has been telling me all the time that I should do my own record and eventually it's here," he says with a proud grin. "all of the people I asked to be with me on the record, Erik and Jon Balke, Bugge Wesseltoft, Sveinung Hovensjø and Paolo Vinaccia, among others, said yes immediately and made me very happy, says the master drummer - I don't know what that is, but they call me that."

All of the music has the Miki stamp on it - two of the pieces are from the E'olen period, the rest are new tunes. Miki N'Doye played world music long before anybody knew the term. He's still on the journey he started in 1944. This record is the best proof of where the journey has taken him by the start of a new millenium.