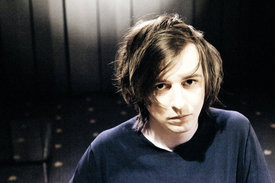 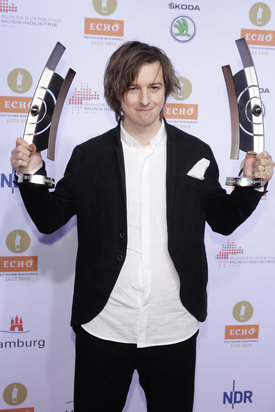 Produced by Siggi Loch with the artists

Michael Wollny, best known as being one third of the thrillingly inventive young contemporary piano trio [em], is a musician who knows no boundaries in his search for new jazz ‘standards’. “Not a jazz standard in the traditional sense,” he points out but, “it also simply describes a song as a starting point that enables the musicians to grow a tune on top of it, a great melody and a few chords. In that respect I consider all of these tunes ‘standards’.”

Wollny‘s new trio recording Weltentraum is a stunning example of contemporary interpretation in the hands of a unique, fluidly virtuoso artist. Wollny, with both elegance and wit, explores the connection between songs that are worlds apart in terms of both centuries and cultures on Weltentraum. But in the pianist’s hands, the combination of interpretations of ‘God is a DJ’ by the riot girl power pop star Pink and the piece ‘Lasse!’ by Guiliaume de Machaut (the French Medieval composer and poet) gets to feel entirely natural. With the resourcefulness of a world class contemporary jazz improviser, Wollny finds common value in the songs’ starkly haunting melodies in spite of arriving from hugely diverse sources.

Says Wollny, “The basic idea for the whole album was to collect ‘songs’. At the very beginning Siggi Loch and I discussed the possibility of doing an album with ‘standards’ - not in the usual sense, but songs and music that I would consider "my" standards. this was the starting point. When I then started to think about the terms "standards" and "songs", I was looking for music, that really "sings" to me - melodies, that touched me, that were speaking to me. The first thing I realised was that I needed to look for music not so much in traditional jazz or contemporary pop and rock, but also in the "lied" and "kunstlied" tradition, which brought me to Alban Berg, Gustav Mahler, Paul Hindemith etc. Also at one point I really got into the idea of doing a ‘night’ album, so this is how David Lynch, Nietzsche and Charlie Kaufman suddenly were in there as well. Some of the themes that were important to me for this album: tonality and atonality; fragility and force, melodic purity, romantic totalism, endless melodies, dark abysses, angels, dream logic, light darkness, gothic beauty.” Welcome to the unique world of Michael Wolllny.

Yet Wollny is also a team player and the assembled trio consists of an important new voice. That’s the New York-based bassist and Wayne Krantz sideman Tim LeFevbre who has been a friend of Wollny’s since [em] played alongside his singular rock-fuelled band Rudder in 2011. “He got to know our music back then and when Eva [Kruse] decided to take some time off for maternity leave, Eric and I figured that Tim would be a natural choice, let alone being a dream come true,” says Wollny. “Tim is one of the most astonishing bass players out there”. They started gigging together as a trio in early 2013. “Tim is just full of ideas, finding counterpoints, taking initiative and of course he is the absolute groove master”.  The latter especially gives a vigorously fresh rhythmic grounding to the album.

The other trio member is the drummer Eric Schaefer, Wollny’s regular partner in the internationally renowned [em] a piano trio formed in 2005. “It’s a very inspiring situation to have a trio with two members knowing each other for over 10 years and a third new member, so on the one hand there is all the musical confidence, experience and trust that Eric and me built up over the last decade. On the other hand there is this constant freshness from Tim, who is playing different from Eva [Kruse], therefore keeping us very awake, surprising us, opening new doors.”

Wollny, who’s playing was recently described by The Guardian’s John Fordham as “one of the most exciting recent developments in European jazz”, has built an international reputation with the trio [em], one of the most compelling pianists of the new European jazz scene in the millennium years. With their four albums to date on ACT, the trio has catapulted him to the limelight with a sublime imagination and ferocious technique that draws from his unique mixed heritage of classical, jazz and rock music. But he has also demonstrated a heartfelt intimacy in his duo partnerships over the previous decade: recording four times with luminary saxophonist Heinz Sauer (From Monk to Prince) as well as with pianist Joachim Kühn and Nils Landgren. 2009’s award winning collaboration with harpsichordist Tamar Halperin on Wunderkammer delivered a fresh dimension to his playing; these new dreamily ambient and sonic tone colours are reflected also on the new album Weltentraum. “When the album was recorded, we thought about a title for quite some time, because ‘songs’ or ‘my standards’ didn't feel right. Finally, Siggi Loch came up with Weltentraum (which is referring to a phrase by Gustav Mahler), and I immediately loved it. The idea of an album as a way of painting a picture of the world with a utopian force and the fragility of a phantastic dream.”

Although consisting of just one vocal track - Pink’s ‘God is a DJ’ features the vocalist Theo Bleckmann - words are of utmost significance to Wollny’s music. “I don't think it's possible to separate lyrics from songs. I've always been very interested in words and language,” he says. “After all, poetry and literature is simply composition with words. Since we are an instrumental band the only way to employ this aspect is through titles and liner notes; so I wanted the "words" on the album to be simple, utopian, naive, surreal, dark, all at the same time. No concepts, no analysis, no description, no political statements, no definitions, but poetry.”

In spite of being a romantically lyrical virtuoso, Wollny’s subtly investigative approach to improvisation always steers him away from the overly sentimental. What essentially draws Wollny to the fascinating selection of material on Weltentraum is, he says, an endless love of melodies. “Simplicity as space that allows the trio to grow stuff on top of it,” Wollny calls it. “These are simple resonances that lay the ground for complex improv.”