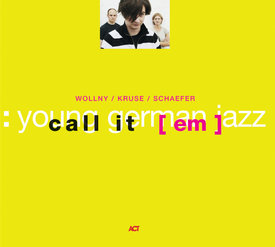 German jazz available worldwide? No chance! In reality, a substantial external trade deficit. From Germany straight onto your CD player? Not very likely  - not on the local scene, hardly ever on the radio, and not even heard live. Jazz Festivals are always full up. German jazz musicians on the stage at their own domestic festivals? Seldom! Even the Jazzfest Berlin, previously the one beacon on the international festival circus, always well supported financially, presents for its 40th anniversary just 3 ½ groups from Germany out of a total of 27. And yet Germany has supported, and indeed continues to support, improvised music to a degree unlike any other. Certainly for the last 50 years. Nevertheless the outlook for local players has been fairly desperate. A few names seem to have made it internationally: Mangelsdorff (though mainly in critical circles), Joachim Kühn (though that’s primarily in France), and  Passport, probably the only really successful native band internationally, but that was only in the Seventies. Today we have our dear Till Brönner, though again here only really regarded as an international star in the local German magazines. There’s still Peter Brötzmann and also Der Rote Bereich. Indeed, the German free improvisation and avant garde scenes are still highly thought of internationally. But even so, when the city of Munich, with substantial public support, recently organised an international symposium on improvised music, with three main concerts involving 18 musicians, there wasn’t a single German to be found amongst them.  It really can’t get any worse.

France, Italy, Sweden, Norway - it’s a different story in all these countries. A number of internationally recognised jazzers. Do they have something extra, or is it just that they sell better? In terms of the opportunities thrown up by jazz education there’s very little difference, and that makes it hard to comprehend. Certainly, quality seems to have an opposite impact on business.

The international Downbeat Critics Poll for 2004 included just Barbara Dennerlein and the locally unknown Axel Dörner as "Rising Stars" but that’s just about it over recent years. German jazz musicians don’t seem to be properly recognised on international stages. But that’s hardly a surprise if they can’t be given a satisfactory recognition in their home country.

ACT boss Siggi Loch has always given the following instructions to rapt students at different music colleges: " 1. The laws of show business also work for jazz. 2. CDs are ultimately made for the paying public. 3. Every musician needs to know how to sell himself and his art." And who is there to support the next generation. Certainly there is every chance in "Young German Jazz", the title of a new series on ACT. In this occasional series young German talents will be given the chance to show off their skills and build their careers, in a sensible and systematic manner. But a label can’t help so many wonderful young talents succeed on its own. "Young German Jazz" is an example that education is required. Above all the promoters of the well-supported jazz festivals need to be made aware of their responsibilities and - without the need for a national quota - give German talent fair and enduring chances to be compared to their international colleagues.

Under 30: A young German piano trio which keeps away from the predictable route, always slightly off-centre and on a groove-oriented trip from the mainstream. Streetwise courtesy of the Big City. Taking on the positive influences of Der Rote Bereich and Rosa Rauschen. Borrowings from hip hop, but also unsmooth, freakish and free. Interaction is crucial, with the band members listening to each other, reacting instantaneously so that, in spite of all the freedom, they are all moving in the same direction. Always on the move, such that standing still would effectively be the same as going backwards. Nervous energy, hyperactive, hectic, three breathless whirling Dervishes in the overtaking lane, giving off polytonal clouds of sound and percussive noise attack. Light and shade. Occasionally going slower, but only when it’s dark. A murky morbidity, just like in a flickering black and white film. Run, Lola, run. Straight through the metropolis. Call it [ em ].