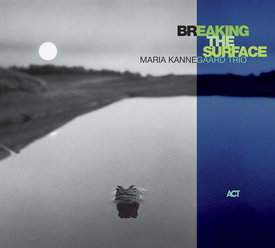 I immediately sat up and noticed Maria Kannegaard the first time I heard her. It was a young Norwegian quintet called Alibi, and at the piano sat Maria. She was playing beautiful tunes, and then there was something about the way she was improvising. Something well defined, conscious, well thought through: "this is my music and nobody else’s". Since then I have heard her with other bands too. But now listening to her first solo album, it is this first impression which springs to mind. "Don’t Get Lost in the Wood" Maria Kannegaard says, and she speaks to me with music so soulful it leaves you with a massive impression, but at the same time this music possesses an inner calm. Her trio, featuring Mats Eilertsen on double bass and Thomas Strønen on drums, has been playing since 1997, and with this record they have delivered the most original trio-debut in Norwegian jazz for a long time.
Nine of the twelve songs are written by Maria, the three remaining are co-composed by the all the members. These pieces were created by improvisation in the studio, but if you didn’t know I don’t think you would notice particularly. "Free" jazz is not about playing as many notes as possible in as short a time as possible. Music made in the present can be as melodic as pre-composed music. Like all the songs on this album, the title on the "free" composistion "Let’s Go for a Walk" is an accurate expression for what this music is all about:  when Mats Eilertsen’s bass just starts wandering, and Maria’s piano joins it on its walk. "Behind the Clouds" is as beautiful as the sky is blue behind the clouds, and in "Tip toe Walking"  bass player Eilertsen is really tip-toeing around -  just to give you some arbitrary examples. I believe the titles being so to-the-point also reflects the wholeness in the songs and the performance; from here to there, and no further than that
Maria Kannegaard says herself that she is preoccupied with form, that musical pieces should tell a story and have a beginning and an end. The title should mean something, and it should say what she tries to express though the music. Danish-born Maria played classical piano from the age of six, and at the same time she started composing, with verses and refrains. In high-school in Norway she heard someone play a Bill Evans record, and when she was told this music was improvised she was so fascinated she decided to become a jazz musician. Today her great inspirations for piano play are Geri Allen and Herbie Nichols (1919-1963), the nearly forgotten pianist who, often over-shadowed by Thelonious Monk, played so differently and at the same time somewhat straight, and Nichols’ music inspired her to play deep chords on her piano. As a student of jazz at the Trondheim Music Conservatory  she wrote her thesis on Nichols.
Maria Kannegaard (29) started playing jazz in 1985, and one of the bands she has played with is Tingeling, led by vocalist Eldbjørg Raknes. Mats Eilertsen (25) and Thomas Strønen (27) already have a broad experience from a range of groups emerging from the young Norwegian jazz-boom in the ‘90s. They started playing with Maria in 1997, proving perfect partners in this coherent unit which is a modern European jazz trio.
The title track "Breaking the Surface" is one of the "free" compositions on this album, a simply expressed mood-piece which is also typical for the relatively short pieces of music on the album. Some of the compositions are simply stunningly beautiful, like "Behind the Clouds" where Maria ends on the theme of the piece, following Eilertsen and Strønen’s introduction. Another is "Down in Oz", the second part of a double track, which possesses something pastoral which brings your thoughts around to Charlie Haden’s "Silence".
In his latest book, the well-known Norwegian philosopher Arne Næss writes that "music expresses feelings better than words". And how difficult it is to describe music with words. At the end of the day what counts are your own experiences. And those experiences you only gain by embracing the music yourself.
Roald Helgheim