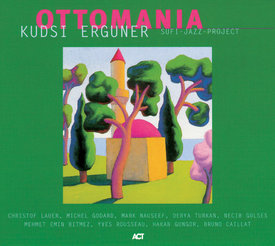 Kudsi Erguner’s Ottomania is the first World Music project that integrates the classical music of the Ottoman Empire with Western jazz improvisations and rhythms. It documents the story of a remarkable musical encounter, and is a logical continuation of Erguner’s eventful life.

Kudsi Erguner was born in Diyarbakir, Turkey in 1952, and has lived in Paris since 1975. On his way to preserving the inheritance of the Sufis, Kudsi Erguner had to battle against those who opposed him, and travel down unfamiliar paths. The flutist (he plays the Ney, a Turkish reed flute) is also active as musicologist, author, teacher and artistic adviser. He has worked as a musician and composer on various film scores (Martin Scorsese, with Peter Gabriel), theater pieces (Peter Brook), and ballet productions  (Maurice Béjart, Carolyn Carlson). He has fused the most varied styles and epochs of occidental music with traditional Turkish music. It was because of this intermingling of musical styles that he aroused so much attention with his participation in Mozart’s The Abduction from the Seraglio at the Salzburg Festivals in 1997/98. Likewise with his solo improvisations during the performance of Guillaume de Machaut’s Messe de Notre Dame with the Hilliard Ensemble at the London Royal Festival Hall in February 1999.

"Listen to the reed how it tells a tale..." So wrote Sufi master Djalal Ed Din Rumi in his mystic 13th century poem about the Ney. Erguner believes that had Djalal Ed Din Rumi been alive today, he might well have anointed the saxophone as holy instrument. Kudsi Erguner is the only Turkish musician of his generation to have been taught the Ney-flute in the classic oral tradition by his father, Ulvi Erguner, the last great master of the Ney-flute, and the former director of Radio Istanbul. Hundreds of years of a musical culture which always strove towards freedom and ecstasy are reflected in his playing.

By the soundtrack of Peter Brook’s film Mahabharata, Erguner, playing together with musicians from Japan, India, Denmark, Iran, and France, had attained a mystical, universal, elemental music. Everything is, after all, only a question of mutual respect, sensitivity, and openness. Unfortunately, 99% of the fusion music that is produced today is simply badly pasted together collages. With Ottomania, I have attempted to let a fusion really develop. It was therefore necessary for both sides to take a step towards each other.

With Kudsi Erguner’s ensemble on one side, and three great musicians from the international jazz scene - the German saxophonist Christof Lauer, the French tuba and serpent player Michel Godard, and the American drummer Mark Nauseef - on the other, Ottomania has successfully taken this step.