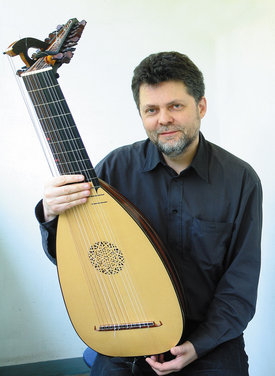 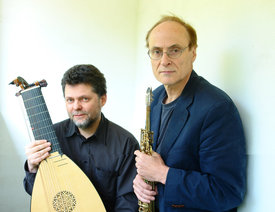 Recorded by Werner Goos at Castel del Monte, Apulien (Italy) in Mai 2009, and in Heidelberg, in January 2010
Mastered by Klaus Scheuermann, February 2010

Visible from afar, an impressive and curious building rises up from a hill in Apulia, Italy - the Castel del Monte castle, an octagon built during the time of Frederick II (1194-1250). It was here, at this mystical place, that the Heidelberg saxophonist Knut Rössler and lute player Johannes Vogt met the classical singer Ute Kreidler for some highly unusual night-time recording sessions. The magic and atmosphere of this place has inspired some musical encounters of a very special kind, and Octagon continues the idea behind the ACT debut Between The Times: “To unite jazz and early music to a meditative chamber music full of clear and flowing melodies.” (Stereoplay).

The symmetrical, eight-sided Castel del Monte is a metaphor for the project which encompasses different cultures and eras. It has been said that the building, today a UNESCO world cultural heritage site, was built as a place for exchange between the worlds of science and the arts. This is not such an unlikely premise, as Frederick II was regarded as a medieval cosmopolitan, a universal scholar and lateral thinker. The Kaiser of the Hohenstaufen dynasty used to gather scholars and artists - in other words the avant garde of his day - at his Sicilian court. He also founded Italy’s first university in Naples, promoted poetry, maintained an active exchange with the Arabic world and spoke several languages.

The octagonal inner courtyard of the Castel invites visitors to imagine it as a place built by Frederick II for the exchange of ideas and thoughts between the representatives of the arts and sciences from many different cultures, as well as from various religions. Johannes Vogt and Knut Rössler continue this tradition in a musical way. On Octagon they interpret melodies from Frederick’s era (and the Christian, Jewish and Arabic cultures around him) in their very own sound language.

The musicians take inspiration from the repertoire of one of Germany’s most famous lyrical poets, Walther von der Vogelweide, as well as the songs of the French troubadours and trouvères, courtly knight’s tales and the influences of medieval Arabic music. The original material of this music has only been passed down rudimentarily, and this lack of notation provided Rössler and Vogt with scope for their own interpretation of sounds, harmonies, rhythms and improvisation. Similarly, the instruments used are also not authentic, not even the lute. In this way the interpretations of the historic works clearly speak the language of contemporary music yet, with every note, they also allow for the recognition of the respect and the fascination that those involved have for the original material and its era.

The result is 16 artistic pieces held together by an almost meditative mood, in a unique span of opposites between musical worlds – between the medieval and the modern age, between composition and improvisation, between respectful preservation and careful renewal. At the same time, Octagon is a musical homage to the free thinker Frederick II whose ideas are still as relevant and as significant as ever