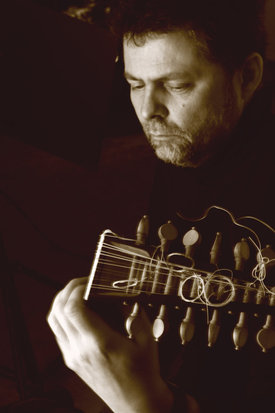 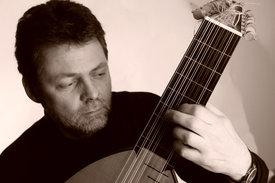 Related Voices in the time machine
Ancient music meets jazz: The ACT-Debut of the ensemble Between the Times with guest Miroslav Vitous

Fortune's ways are often unpredictable. Two musicians with seemingly completely different focus. One of them a German jazz saxophonist, blue note saturated by countless gigs in subterranean joints since the 1960’s. The other a lute player from a completely different scene, specialist for ancient music from the middle ages on. Brought together by the visual arts – both of them often performed at gallery openings for a number of Heidelberg artists. One day they were asked to play together, as the relevant exhibition connected the old and the new. An unexpected and consequential prod: It resulted in a lasting collaboration. Now saxophonist Knut Rössler and lutenist Johannes Vogt are releasing their ACT-debut: Between the Times is the name of the CD and the ensemble itself, which is manoeuvred through time and style by the two masterminds and their collaborators percussionist Mani Neumeier and stellar bass player Miroslav Vitous.

Between the Times is an effervescent name that resonates on a number of levels. Here it also means between two musical epochs, meaning not quite renaissance anymore but not baroque yet. The compositions that have inspired this recording stem from the period around 1650. Johannes Vogt finds the music from such transitional periods especially fascinating, the pieces from this time display an unusual pleasure in experimentation, their vocabulary is not yet standardised, like that of later compositions: a daring, un-clichéd and often surprising language. Rössler and Vogt venture into almost uncharted territory (outside of esoteric circles, that is!), with music by composers like Ennemond Gaultier, Pierre Dubut or Jacques Gallot. This allows for discoveries on a number of different levels.

“We did not wish to ransack the original compositions” says Knut Rössler, “but rather let them shine in a new and respectful light.” The 17th century pieces are not interpreted in a jazz way, but become a starting point for new original compositions that take their bearings from the language and moods of the original lute music. The originals do have their say though: as an interlude in “Contemplation”, as an introduction on other tracks. This is a sensitive approach to the music. The musicians dismiss the commercially misused term “crossover”, which is usually synonymous with a dilution on both sides of the equation. Listening to their music one quickly realises that this is a sensitive bringing-together of two worlds, in a way a gentle musical time machine.

These worlds anyhow have unexpected correlations. Improvisation plays an important part not only in jazz, but also in ancient music. Johannes Vogt was thus no stranger to the art. Yet, before taking up the lute, he was among other things an electric guitarist in blues-rock bands. Knut Rössler was moved by the ancient music straight away during his first musical encounters with Johannes Vogt. A music, that like jazz contains many ostinati, recurring repeated figures that allow a development to take place. “Some jazz musicians who have heard us play found the harmony of the old pieces reminiscent of jazz changes”, says Vogt. Yet, he says, “I had to learn a whole new way of improvising: If one just plays chorus after chorus one soon realises that this does not work". Uncharted territory reveals itself in the encounter with old notes.

A territory traversed with poise and grace by the guest star on bass Miroslav Vitous. Vitous, born in Prague in 1947, moved to the US as an 18-year old. He was a founding member of Weather Report and played with Miles Davis as a young man. He is a titanic figure on the bass, has a huge and full sound on the instrument and has, throughout his long career, contributed much towards the bass’ emancipation in jazz as an equal soloist. How this collaboration came about is a story about daring and winning. Rössler and Vogt have admired Vitous for a long time, and considered his sound ideal for their music. They found out his fax number through his label, wrote to him, sent material, he found it exciting and said yes. Neither the listener, nor Vitous himself is likely to regret this decision.

„Between The Times“
Paraphrases of 17th century French lute music

Saxophonist Knut Rössler and lute player / guitarist Johannes Vogt are the founding members of the ensemble "Between the Times". Old European melodies, especially those from the playfully creative transitional periods between the musical eras, constitute the backbone of their projects. These original compositions present a starting point that allows the musicians to create paraphrases and improvisations and they have a seminal influence on their own new works. On this, their fourth album, Rössler and Vogt have added bassist Miroslav Vitous to the band, who, as a jazz musician with a European heritage is a congenial collaborator for the concept of "Between the Times".

Our musical journey begins with lute music written in 17th century Paris. Following a period of experimentation, a lute tuning had established itself in which the top six strings respectively pairs of strings form a D minor triad. (A contemporary guitar player would call this an open tuning. A saxophonist would call the lute on this recording a Bb-instrument as it’s A-string sounds a tone lower than today’s tuning note due to its low French tuning.)

Many works originating from the first decades after introduction of the D minor tuning sound opener and more playful than their somewhat stricter renaissance predecessors, and the sometimes rather formulaic baroque music. The timeless flavour and the pronounced lyricism of the chosen works, combined with a clear and uncluttered diction, speak directly even to listeners unfamiliar with the language of ancient and classical music.

The original composers (where known) featured on the CD are:

The improvisations on this CD are rarely based directly on the original lute compositions. Our pieces are rather paraphrases of the old compositions: The original compositions become part of new compositions, which use and extend the mood or elements of the original, or create a contrast to the original, and thus open it up. A prominent process we used in the adaptation was to juxtapose the melodically and harmonically involved lute music with modal improvisation. This creates a form of release and openness, which again allows an intensification of a different kind to take place in the improvisation. When we play the original pieces within our paraphrases, then we show our respect for these perfect miniatures by leaving them unchanged and unaccompanied. (We did leave out the obligatory repeats in some cases in order to retain the balance of our new pieces.) There is but one piece that does not appear in its pure form as a lute solo: "Dialogue" by Gallot features the double bass doubling the lute bass, and the repeats are improvised by saxophone and bass.

The large interval leaps in the melody of Dubut’s astonishing original are reminiscent of Bach’s well-known sarabande for lute in G minor (the cello version is in C minor). Our version presents a number of orchestration possibilities: The beginning of the A-section of Dubut’s sarabande, played by an "orchestral unison" of double bass and saxophone with lute accompaniment, the middle section like an island - the peaceful lute original, and at the end an improvised reprise played by lute and bass. In between, we find extended modal improvisations by bass and saxophone.

A free prelude with no audible bar-lines -"non mesuré", and a dialogue between lute and saxophone are set against a rhythmically distinct improvisation over a bass ostinato that dissolves into a free dialogue between saxophone and bass towards the end.

The Marquise de Montespan was "la maîtresse royale en titre", the official mistress of Louis XIV. "Kuna" is, according to some linguists, a word used 30.000 (!) years ago for "woman". Parts of the harmonic structure of Gallot’s pleasing piece are the basis for an improvisation, which intensifies, and then eases off again.

A short saxophone introduction followed by the original - played with a lecturing diction. The melody emerges out of a continuous arpeggio-movement (similar to that in Couperin’s famous cembalo piece "Les baricades mistérieuses"). The arpeggio figures evolve into a new piece for lute, over which the saxophone improvises.

Lute and bass state each of the six sections of the original, which receive improvised responses from saxophone and bass. After a tranquil interlude, the group takes up some of the harmonies of Gallot’s theme.

Lute sounds and saxophone improvisation. A lucid dream in which the players are aware of both the dream and the actual chaconne which follows, its harmonies casting their shadows forward.

The dark and melancholy mood of the lute piece increases even more during the saxophone improvisation over an off-kilter ostinato in seven.

In this piece, an eruption of rhythm leads to meditative introspection. Some of the notes of the accompanying lute figures surprisingly stem from Dubut’s sarabande.

A "tombeau" is a musical memorial dedicated to a deceased person. Melodic elements of Gaultier’s tombeau also appear in our new piece - the theme of which is change (on a metaphorical and on an actual musical level) and transience.

"Canaries" are pieces that apparently relate to a dance from the Canary Isles. Two rhythmic concepts meet in this final piece: The concept of playing with syncopation on the basis of a steady beat and (in the lute original) a flexible tempo that follows the wavelike motion of the melody.