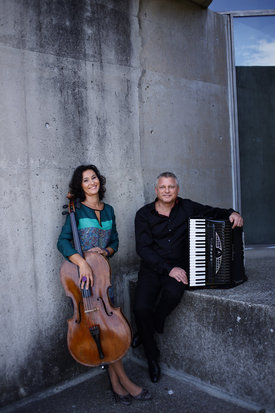 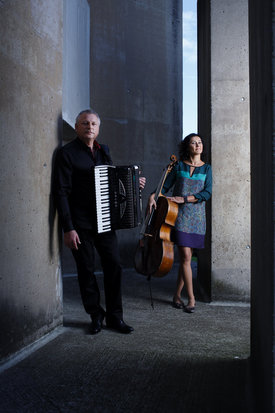 All music composed by Klaus Paier, except 5, 7 & 9 by Asja Valcic

Like so often, it took a long time to form something that nowadays seems destined to be together. It began twelve years ago, when Austrian accordionist Klaus Paier assembled a string quartet for one of his projects, and these four went on to become the radio.string.quartet.vienna. After their sensational debut album “Celebrating the Mahavishnu Orchestra“ they worked together with Klaus Paier on their next album “Radiotree” and it did not go unnoticed how well Asja Valcic’s cello suited Paier’s accordion. It was the beginning of a co-operation - “A Deux”, which, according to the SPIEGEL, combined “spectacular bitter-sweet sounds of an accordion with a cello that can groove like an upright bass” into “the very best of euro jazz”. Both audience and critics were sold, and the accolades followed, such as the “CD of the month” in Audio and Fono Forum.

The duo’s music is daring and full of curiosity. In search of the perfect sound of an accordion and bandoneon, Klaus Paier has developed an absolutely unique technique of his own (on instruments built especially for him) that allows his instrument to breathe and gives him an unrivalled stylistic as well as improvisatory freedom. Various influences are noticeable: tango, bal-musette, Balkan, jazz. Paier appreciates the accordion tradition: “For me the roots are like a main street, on which I don’t want to stay too long. That is why I take a quick and spontaneous turn.”

For Asja Valcic it was not always easy to follow him on these roads, although she mastered all playing techniques of the cello. “I had not been improvising that much until then.” After four years of working together and hundreds of concerts this is no longer the case. “It was time to make a sequel for “A Deux.” The result is called “Silk Road” and it is not just any record, but rather the convincing result of a harmonious and intense co-operation of two adventurous explorers, who both fully master their instruments as well as complement each other perfectly.

The growth of the project can also be measured on the fact that Asja Valcic has composed three of the eleven pieces. Although she has experience in composing, compared to the professional composer Paier she is a novice in this field. “As a matter of fact, ‘Waltz For Mama’ is the second piece that I have ever composed. Actually it has lyrics, but Klaus has made a perfect instrumental arrangement of it,” she explains. Therefore, “Silk Road” has even more layers, colours and energy. It has South American (e.g. “Celtango) as well as South and East European sounds (e.g. “Ayer”), peaceful ballads, cheerful blues songs (“Song is Blue”) and rhythmic up-tempo pieces, such as Paier’s “Whirlwind“ or Valcic’s “Stirring Summer Storm“ that live up to their names.

Nevertheless, “Silk Road“ has a unique and homogenous sound. The title song demonstrates Paier’s ability to introduce and transform musical themes: the bandeneon theme appears from a distance, builds up and becomes loaded with energy through elaborate pauses and rubatos. Equally masterful is the final piece “How Roses Are” that Paier has dedicated to his American colleague, accompanist and longstanding friend Frank Marocco, who died in March. However, it is an optimistic, even a cheerful song – a jazz farewell from Austria to Chicago in the New Orleans tradition.

Paier will continue creating new sounds as a solo artist as well in various assembles – Valcic will carry on with the revolutionary radio.string.quartet.vienna and will soon appear in a trio with her ACT colleagues and masters of improvisation Iiro Rantala and Adam Baldych. But time and again these two kindred spirits will come together and compose further musical road movies beyond conventional ways.