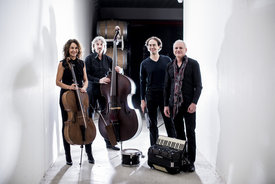 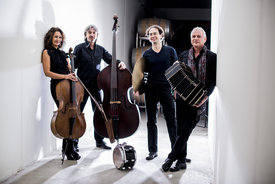 “So beautiful, it brought tears to the eyes” ran the headline of a live review of Klaus Paier and Asja Valcic in Munich’s respected Süddeutsche Zeitung. And London’s The Observer remarked, “their pieces evolve with such vigour and clarity... the music sounds like the product of one mind rather than two... its charm is all its own”.

Paier and Valcic’s music is always sensual and rich in images, and this opulence of colours and pictures is also at the heart of what “Cinema Scenes” is about: they let their impressions of films flow freely as music, but above all the two musicians give expression to their own visual ideas. This music seems to be just asking to be seen on a bigger canvas, and therefore the duo is augmented. In the quartet format one senses an extra groundedness, but presence of the other voices also brings a fascinating potential for new departures.

Just as films in their unique way are wont to do “Cinema Scenes” does also take us on a journey. It might be just the shortest of trips out into the garden: in “Le Jardin” an irresistible melody sets us dreaming. Or the destination might be out in the wider world: “Safran” has a powerful oriental aura. Or it could be a short roam with dramatic interruptions, such as “Inspired Tale”. Just as in a movie, a broad palette of feelings and thoughts is evoked in this album. “Griet’s Theme” from the movie “The Girl With The Pearl Ear-Ring” brings a combination of confusion, disquiet, and bittersweet sadness – all at ferocious speed. The title track is in four parts, starting with an arrangement of “Doe Eyes”, which was written for “The Bridges of Madison County”, and then driven forward by Paier’s own ideas. It combines everything from nostalgic longing and awestruck silence, to angry protest and the joy of triumph.

Everything is dramatized superbly by the four musicians, whether they are doing virtuosic expositions of melodies, incorporating propulsive latin rhythms (in “Hesitation”) or even a full-on jazz hoe-down (in “Griet’s Theme”). There is an overarching dramatic pattern to this album, but each of the individual pieces also leaves its mark, carrying its own tension and excitement – and the thematic connection to the cinema.

That is particularly true of Asja Valcic’s nervy, wildly stop-go piece “Rush” which is full of unexpected escapades, and also of the last piece on the album, “Ricochet”. If the idea of a detective story somehow lands in the listener’s mind, then he or she should hold that thought, because an action plot really does develop in this piece, from its sultry and still beginning as if sweltering under a midday sun, to a speeding-up of the action and right on through to a happy ending.

Not just this piece, the whole of “Cinema Scenes” has a special way of hitting the mark, of showing us the movies at their absolute best.