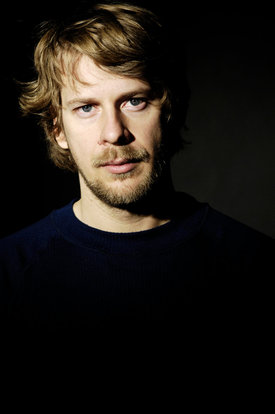 Cover art by George Condo © 2005 Uncle Joe (detail), by kind permission of the artist.
George Condo: “I think it’s time for another shocking image to enter in to the world”

Kalle Kalima puts the Western back into country and western. High Noon: Wind scrapes across the empty streets... timorous townsfolk peek through closed shutters… as three figures head into town: a guitar-toting Finn from Berlin, Kalle Kalima, a veteran American bassist, Greg Cohen from way out west in Los Angeles, and a young gun from Germany, drummer Max Andrzejewski…

Kalle Kalima's music is mean, moody, magnificent, and is also adventurous and full of surprises. Whether he is off exploring the badlands on the borders of rock, putting his hand on his heart to salute his Finnish homeland, or inspiring jazz lawlessness in the band Kuu!, this forty-one year old is first and foremost a free spirit.

Kalle Kalima's new project takes him back to one of his first loves. “As a teenager, I had guitar lessons with a teacher who introduced me to country and western. I really got into it, and have played it ever since, mostly for my own pleasure.” Playing for enjoyment, however, is only part of the story. A few years ago he was in Austrian drummer Alfred Vogel's band “Die Glorreichen Sieben” (The Magnificent Seven), which put together two country-jazz projects, a new version of hits from westerns, and also issued a tribute to Neil Young.

Whereas those two projects were quite impulsive and carefree, “High Noon” takes a different tack. “This time it's about getting to the heart of the matter,” says Kalima. “This album is in the form of a road trip which passes through various landscapes. There's not too much to-ing and fro-ing, I've stuck to a tight unifying concept here: it's in the mould of ‘Kind of Blue’, but with country-jazz.” The thirteen tracks of the album display huge variety, but when taken together almost form a suite. As its central episode, there are four hits from films scored by the distinguished Hollywood film composer Dimitri Tiomkin, including (naturally) “High Noon”, the title theme of the classic western from 1952 starring Gary Cooper. The remaining tracks range from classic Western tunes like “South of the Border”, or the mid-19th century sea shanty “Santy Anno,” to the campfire classic “Ghost Riders In The Sky”. There are also evergreen songs such as The Shadows' “Man of Mystery” and Leonard Cohen's “Hallelujah”.

Kalle Kalima also includes popular tunes from his native Finland: “Jääkärimarssi” (the march of the hunters) and Hiski Salomaas' early ballad about a logger who travels the world, “Lännen Lokari”. Nevertheless, even with extremely rapid switchbacks of tempo, and all manner of sound experimentation, there is an underlying and consistent vibe to the album. With its relaxed and slyly humorous character, it develops a sense of flow all of its own, which carries the listener along in the undertow.

That strong sense of continuity also has its roots in the empathy, and the exemplary sense of shared responsibilty that Kalima and his two colleagues have. “We're a proper band,” says Kalima, ”which means that everybody has a hand in everything.” Greg Cohen in particular was the one to give the lead here. He has played with John Zorn, Ornette Coleman, but is also known for his work with pop eccentrics such as Tom Waits, Lou Reed and Laurie Anderson. Kalima remembers how the project got going: “We started with pieces that Greg had heard in his childhood. The atmosphere of the road songs immediately resonated with me as a Tom Waits fan and set us off in the direction of my Finnish songs. The Finnish mentality fits well with country music and with tango. Sentimental, even kitsch music is extraordinarily potent, and that is something which fascinates me,” Kalima explains.

“High Noon” also has as its story the opportunities and possibilities that are opened up by the blending of cultures. While not exactly a new theme, it is certainly current and relevant. “You only have to listen to Tiomkin's music,” explains Kalima. “He was a Russian who made his way to Hollywood, added some authentic American ingredients, and by the early 1950s he had established himself as the most successful composer in Hollywood. That story affected our approach, because ours is emigrant music too. I am a Finn in Berlin, Greg is an American, Max is German but he has his Polish roots. The challenge here was to give our individual take on country music the feel of some real variety. We wanted to tease everything that we could out of it, but needed to do it without disturbing the foundations.” They have succeeded in that task, and quite brilliantly.