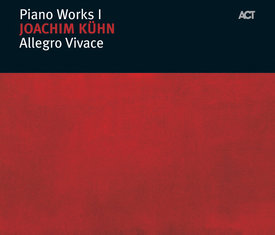 Creating a unity between keyboard and music: the CD “Allegro Vivace” by Joachim Kühn
If there’s a pianist who can record Bach, Mozart, John Coltrane, and Ornette Coleman while also including his own compositions without their seeming out of place, it can only be Joachim Kühn.  Born in Leipzig in 1944, he regularly performed in classical concerts as a child, before his first appearance on the international jazz stage at the age of 19 – and where until now he still remains a major figure, not least in Europe. This CD by Joachim Kühn is the first of a new series of piano recordings, with which ACT Music now wishes to showcase famous pianists performing solo. And Kühn shows in this release, which he calls "Allegro Vivace", that he has an unsurpassable and amazingly broad technical range: Couperin, Bach, Coltrane, Coleman – they’re all here, both in their own right but also very much in the image of Kühn.
Joachim Kühn remarks very pointedly about these recordings: "I show here not how well I can play the piano: I rather play music". And that’s really the core of what this album is about. It goes without saying that he plays well. But whoever hears this album feels immediately that he is in no way just showing off, but rather that he has a creative enthusiasm to get to the heart of each piece – so that in his hands they sound as though they were made for each other. His understanding for how close the different musical worlds can actually be to one another was put in focus a few years ago, when Kühn recorded Bach with the Leipzig Thomaner Choir under Thomas Kanot and Christoph Biller. "Sometimes I thought: today you’re doing this, but in two days’ time you’ll be playing again with Ornette Coleman. How does that work? And then I realized that the gap isn’t really that big."
And there are certainly no incongruities of style here, despite the amazing musical range. The first piece, "Plein chant du premier Kyrie, en taille" comes from a 1690 mass by the French composer François Couperin. He extends the measured voices of the originals with an improvisation, where fragments of the bass line gain an ever-increasing jazz personality – before finally returning to the starting point. "The rationale is that I can here improvise in other directions than before", says Kühn about his pieces by Couperin, Bach and Mozart. "I have taken the themes and then tried to make them my own."
Thus he is not afraid of tackling such weighty pieces as the "Chaconne" by Bach. This is the fifth movement of Johann Sebastian Bach’s Partita for Violin No. 2 in D minor: a movement that in the original takes over 15 minutes to perform and is a benchmark for all violinists, because the Chaconne is the perfect opportunity to show a universe of contrapuntal and emotional expression. A falling bass figure is being constantly metamorphosed and then reborn with newly-built chord structures – and with Kühn they are being constantly taken further with eruptions and sharp contrapuntal improvisations worthy of the best of free jazz.
Kühn doesn’t actually take a piano piece by Mozart but rather the famous Clarinet Concerto (in A major, KV622): "I have always loved it – as a result of both my brother (clarinettist Rolf Kühn) and Benny Goodman." Here the pianist sticks to the basic of three movements, though within this always adds improvised sections. In this case the balance between the original and improvised extensions is especially unexpected. And when Kühn adds a lyrical pearl of the great saxophonist John Coltrane at the end of the concerto’s rondo ("Lonnie’s Lament") it has its own inner logic.
On this CD Kühn also pays tribute to the other great jazz innovator of the 1960s: Ornette Coleman. "Coltrane and Coleman have accompanied me for a long time through my life as a jazz musician – from my earliest youth." Kühn has played regularly with Coleman for many years and knows a substantial repertoire of "over 150 pieces" by the alto saxophonist, many of which haven’t appeared on CD releases. As is the case of the two compositions chosen here. These lead on through their own inner logic to three original compositions of Joachim Kühn himself: the feverish and nervous "The Night", the introverted and calm "Invisible Portrait", whose lyrical warmth begins very quietly, followed by the ever more energetic concluding piece, "Mar y Sal", which takes one into a very different Kühn world.
About the creative process behind this recording of this album in France, Kühn says: "I was able to go and work in a super studio with a super Steinway. I just played without worrying whether a CD would be the result." He recorded whenever the moment was right – "and that was only as long as the spontaneity remained." "Lonnie’s Lament" was recorded because the engineer by chance mentioned it and Kühn immediately gave free rein to his love of this piece. "I have the feeling that with these recordings there is a real unity between myself and the instrument," explains Kühn. Not least this album is convincing for one particular reason. He says: "There is still so much for me to discover" – and that’s after a career lasting four decades. The pleasure in discovery is to be found in every bar. And this gives a rationale to the new series of pianist recordings on ACT.