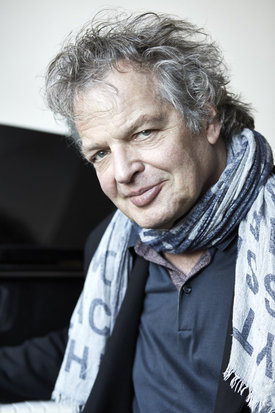 “The wisdom of old age meets the tempestuousness of youth” wrote Der Spiegel, describing the meeting of generations in Joachim Kühn’s trio with Chris Jennings and Eric Schaefer - both are around 30 years younger than he is. And it is also an apt way to describe how both tendencies co-exist in the 73-year old jazz pioneer’s own playing. His gaze is directed to the future, he has the history of jazz behind him, and he never kow-tows to convention. This piano genius loves freedom and fantasy, driven by the imperative to keep discovering the new. If the Joachim Kühn New Trio is his most recent adventure story, then “Love & Peace” is its second chapter.

“I have found a new dream team, and they inspire me in a completely new way,” he says of this ensemble which formed in 2015. It signalled his return to the classic piano trio, in the wake of a thirty year association with Jean-Francois Jenny-Clark and Daniel Humair. “A new trio, a new Joachim Kühn” was how NDR praised the group’s debut CD “Beauty & Truth” which appeared in March 2016. Jazzthing magazine considered that the “most consistently innovative and the free-est piano player in Germany”, had “added another exciting, and above all unexpected chapter to his biography and his discography.” And to cap it all, the Joachim Kühn New Trio was awarded the best German Ensemble prize at the 2017 ECHO Jazz Awards.

“At my age,” says Kühn, “you have to do more playing than you used to, to make sure you don’t get rusty.” That is a testament to the sheer determination which has made him the most significant and internationally successful pianist of his generation in Germany. On “Love & Peace” he is on top form: once again it's about “strong melodies that you can give a shape to,” as Kühn puts it. He’s a master of both free jazz and fusion but with a new game-changing approach: “I wanted melodic simplicity, an album with short concise pieces”.

It is almost inevitable that the songs should deal with two things that the world simply, urgently needs more of: love and peace. “I didn’t choose this repertoire in a hurry, but rather in a very considered way. But I also I did let chance play its role.” That's how the short, almost ebullient melody of “Barcelona - Wien” came into being during a flight between those two cities. The image of agile horses was one which spontaneously occurred to him in the skittish, yet elegant theme of “Mustang”.

With “The Crystal Ship”, Kühn has again taken a track by the Doors, the band which more than any other is synonymous with his generation of 1968, and the peace movement in an era overshadowed by the Vietnam War. Classical music is also represented, with a luxuriant and grooving version of Modest Mussorgski's “Le Vieux Chateau” from “Pictures from an Exhibition”. A piece (“Night Plans”) from his unique and formative collaboration with Ornette Coleman undergoes an almost tender, new reappraisal by the trio, as does the turbulent Kühn classic “Phrasen”.

Kühn asked his two partners for one composition each: Chris Jennings has contributed the swinging, almost folk-song-like “Casbah Radio”, while Eric Schaefer has penned the elegiac “Lied ohne Worte No. 2”, which perhaps reminds one most of the “old” Joachim Kühn. Schaefer's dynamism, spontaneity and spirituality make him an ideal companion for Kühn. "I had invited him to Ibiza and we played together for three days. But I knew after just ten minutes that I wanted to work with him,” Kühn recalls. “I've had a similar experience with Chris Jennings, a fantastic bass player with great capacity for empathy.”

“Only if you live freely can you really improvise freely,” says Kühn. For several years he has been putting everything in place to ensure his own personal and creative freedom at his finca on Ibiza . With “Love & Peace” his New Trio has once again succeeded in breaking into new territory. Joachim Kühn’s potent creative will, unbridled love for music and inner peace reside at the heart of this album.