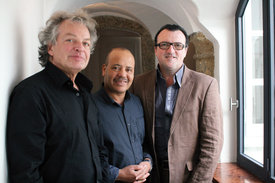 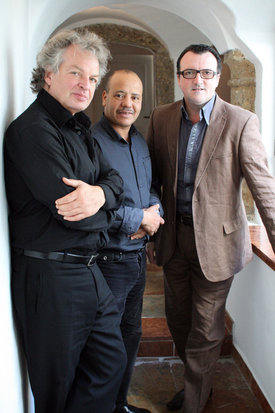 “When do you know whether you have a band that works? You can’t plan something like that,” ponders Joachim Kühn. The 66-year-old is a veteran from a tradition of conscious avant-garde music, a partner of greats including Michel Portal, Archie Shepp, Ornette Coleman, Rabih Abou-Khalil, Stan Getz, Michael Brecker and Michael Wollny, and one of the few international German jazz stars. But he had no idea what his acquaintance with Majid Bekkas, the Moroccan guembri virtuoso and driving force behind the Moroccan music scene, would lead to when they first met in 2003. This initial meeting soon led to a deep friendship and musical partnership which proved inspirational for everyone involved - this includes Spanish drummer and percussionist Ramon Lopez, who joined Bekkas and Kühn later on. In 2007 they released their first joint album Kalimba (ACT 9456-2) which was followed two years later by Out Of The Desert (ACT 9475-2) featuring Gnawa musicians from Morocco and Benin. Both albums won the German Record Critics Award, and now, two years later, the trio proudly announce the release of their third: Chalaba.

Kühn, Bekkas and Lopez are already a dream team, a magical trio that have developed a totally organic and harmoniously evolving world music. A trio which, despite the greatest degree of freedom of the individuals, manages to find a compelling form with which to conjure up increasingly resonant songs. “That’s why we continue playing together because the music develops in such a unique way, always becoming better,” says Kühn. “The band has priority, for all three of us.”

Similar to Kalimba, Chalaba was also recorded deep in the heart of the Eifel region, in the studio belonging to sound engineer Walter Quintus, who Kühn trusts implicitly. “He is one of the best in the world, there’s no doubt about it. He has also been my partner for 40 years and we’re a great team.” For one week they all lived, ate and played together, and this relaxed yet concentrated working atmosphere can be heard on Chalaba.

This album shines in all colours. To begin with, “Enjoy” is a future hit, created by Kühn’s full and rapid piano playing, Bekkas’ memorable guttural vocals and the powerful drive of Lopez’s drums. Many pop songs could learn a thing or two from its catchy melody, underlain by a bouncy reggae-style rhythm. This is followed by the wonderfully lyrical and easy-going “Asmaa”, enriched with tabla and flamenco elements, which Bekkas wrote for his daughter of the same name.

Kühn proves himself to be a great master of chromaticism and a brilliant refiner of his own developed harmony model (Diminished Augmented System) in “Back to Normal”. The mystery that encompasses Kühn’s music is at the centre of “Play Golf In The Fresh Air”, an up-tempo track which almost sounds like thriller cinema soundtrack. Kühn didn’t even want to explain the title; “It should remain a secret of the band. I can only say that none of us play golf, we’re still too young for that.”

The title track “Chalaba” is the first of two traditional Moroccan pieces that Bekkas arranged and prepared as a basis for improvisation. The piece develops from a meditative guembri solo to an increasingly rousing musical lament and is a perfect example of how creatively and intelligently this trio works with all kinds of musical templates. Bekkas’ “Hamdouchia” is a rhythmic wild camel ride through the desert and, similar to “Mimoun Saadiyamou”, evidence of Kühns’s assumption that, “Blues was not discovered in America but comes from Morocco and Mali.”
On “Soon In June” Kühn reaches for his second instrument, the alto saxophone, which he always has with him on his travels to Africa - “Because a grand piano isn’t always available.” “The Second Egg” came about during breakfast on a dull flight and is Kühn’s virtuosic contribution on piano, incorporating historical musical ideas from classic to free jazz, and highly accomplished group improvisation.

“No-one needs to disguise themselves in this band,” summarises Kühn. “I feel freer here when improvising than when I am playing in a conventional jazz group even though there isn’t usually so much improvisation in Gnawa music, although it may sound like it. I get the most out of what happens in the moment. In the future I would like to study Arabic and African music even more intensely; it is so rich that it is almost a job for life.” Working brilliantly despite being unplanned, listeners can expect a great deal more from Joachim Kühn, Ramon Lopez and Majid Bekkas...