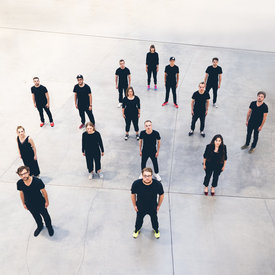 “Jazzrausch Bigband is making jazz sexy again” (Bayerischer Rundfunk). Downbeat has singled out not just the band’s “high-voltage performances” and “party atmosphere”, but also the amount of experimentation going on. The ensemble’s ingenious mix of techno and big band jazz has proved to be just as accessible to people listening to the band from the comfort of their seats in a concert hall as it has to those sweating it out on the dance floor. Since 2015 Jazzrausch Bigband has been in residence at Harry Klein in Munich, a club renowned for its house and techno acts as well as for its stunning live visuals; this cooperation between a techno club and a big band is truly unique in the world. From its base at the club, the pioneering ensemble has defined a completely new genre, “techno jazz”. The band’s music is getting noticed on the other side of the Atlantic too: Jazzrausch Bigband has performed at New York’s Lincoln Center, and Downbeat magazine has pinpointed this unusual band’s remarkable strengths: “A high-voltage performance with party atmosphere and yet plenty of experimentation. The mix of jazz and techno initially might seem surprising, but actually makes perfect sense.”

On their previous albums “Dancing Wittgenstein” and “Beethoven’s Breakdown”, Jazzrausch Bigband impressively demonstrated its process of finding new perspectives on the artistic interaction of themes and elements from a wider cultural context. The focus of all the group’s trailblazing creativity has now turned to “téchne”. This ancient Greek term, “τέχνη”, is still significant in today’s European-influenced philosophy and its understanding of the arts, science, and technology. Indeed, the element which was decisive in sparking Jazzrausch Bigband’s interest in “τέχνη” was the fact that the original concept of both ‘making’ and ‘doing’ can be applied indistinguishably to any of the three.

The idea of “téchne” was particularly appealing to composer Leonhard Kuhn because it drew him into a musical exploration not just of the relationship between art and technology, but also made him want to go further and work his way through bigger questions in science and philosophy, and notably existentialism. Thus, “What It Is” looks at the politics of widening wealth inequality in the current Corona crisis. He shows in Sartre‘s words, that there is an alternative to the famous “It is what it is”. In “Der Literat” Stravinsky-esque harmonies are interwoven with complex rhythms and melodies, as Kuhn places words by Dada poet Hugo Ball into a wild techno setting. In “AI 101”, the technology of Artificial Intelligence is combined with the art of music by the use of AI as a composition tool: “This piece raises the question of whether AI is progressively taking on more of the characteristics of human beings, or whether in fact it’s the reverse. Don’t we sometimes already behave far too much like machines in a self-imposed panopticon prison?” Such glimpses into Leonhard Kuhn’s extraordinary ways of thinking are always rewarding and illuminating.

In addition to these pieces by Leonhard Kuhn who is the band’s main composer/arranger, “téchne” also features compositions by composers familiar with the band. This is actually quite an unusual step for Jazzrausch Bigband: “Most of our programmes are through-composed and function as a cohesive whole,” explains Roman Sladek. “With ‘téchne’, on the other hand, we wanted everything to be more kaleidoscopic, multi-faceted. Theresa Zaremba is a brilliant film composer and Andreas Unterreiner a great jazz trumpeter and composer. We have already worked on complete concert programmes with both of them, so their compositions fit perfectly into the world of ‘téchne’.” Another new feature is the roll-call of star guests invited to join Jazzrausch Bigband: trombone star Nils Landgren is on “téchne"– he had already guested on “Beethoven's Breakdown”. We hear the completely beguiling voice of Nesrine in the opening track “Mosaïque Bleu”. Plus there is a highly individual contribution from singer/theatre actress Jelena Kuljić, known from the indie jazz band KUU! and a permanent member of the Munich Kammerspiele – her interpretations of texts are particularly evocative. And Viktoria Tolstoy, Wolfgang Haffner, David Helbock, Kalle Kalima and Jakob Manz complete an impressive list. The album was recorded by Josy Friebel at the Harry Klein club: “It’s where we feel at home. This environment put us straight into the right vibe for the album, rather than starting off with the dry sound of a recording studio.” And “téchne” does indeed sound a bit more techno, more “down to the floor” than the previous albums with their more complex arrangements.

“Holy cow, what a band!” was Fono Forum’s ecstatic response to Jazzrausch Bigband. A statement that certainly also applies to “téchne", and which should also encourage more people to get out and hear this band live. With the new Jazzrausch Bigband album, the young musicians and their guests revel in making seamless and effortless transitions from one sphere to another. Through their compositions and lyrics they embrace mathematical, philosophical and literary themes, with a compelling band sound fusing jazz, classical music, and techno. With their dazzling confidence, genuine authenticity and communicative panache, the members of Jazzrausch Bigband have created a musical world which is as close to jazz and its origins as it is to the electronic music of the future.