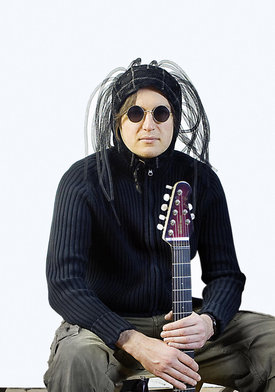 Jan Zehrfeld – Guitar (born 1977 in Munich, Germany)
Studied jazz guitar at the University of Music and Dramatic Arts in Graz, Austria (with Karl Ratzer), the Sibelius Academy in Helsinki, Finland (Raul Björkenheim), at the Richard Strauss Conservatory in Munich, Germany (Peter O’Mara), and was a member of the National Jazz Orchestra (under Peter Herbolzheimer). He has performed with Klaus Doldinger’s Passport, Uwe Ochsenknecht and band, the Hilliard Ensemble, Wolfgang Schmidt, Roberto DiGioia, Martin Schmitt, Wencke Myhre, The Croonettes, etc. Zehrfeld formed Panzerballett in 2004 driven by a desire to combine his hard rock roots with his deep understanding of and extensive experience with jazz and thereby find the common denominator within the two essentially different sound aesthetics.

Andreas Dombert – Guitar (born 1979 in Straubing, Germany)
Also a former member of the National Jazz Orchestra and winner of Straubing’s Cultural Advancement Prize, Dombert concluded his jazz guitar studies with Helmut Kagerer in Nuremberg. He and Kagerer later toured together in duo. Andreas currently works and records with Claudia Koreck (top 20 on the German album charts).

Gregor Bürger – saxophone (born 1976 in Munich, Germany)
Leader, composer, and arranger of the big band “Earforce”, Bürger studied jazz saxophone in Linz, Austria, and Munich. Bürger was a member of both the Bavarian Youth and National Jazz Orchestras, and has toured with The Temptations and funk trombonist Joseph Bowie.

Heiko Jung – bass (born 1982 in Memmingen, Germany)
Concluded his studies at the Richard Strauss Conservatory (Munich) with best notes, and was a member of the Bavarian Youth Jazz Orchestra. In 2006 Jung won first prize with his group “Fourscore” at the “Young Jazz Players” contest in Bavaria. He has played with, among others, Claudio Roditi, Jay Ashby, Bobby Shew, Frank Greene, Martin Scales, and Werner Schmitt.

Sebastian Lanser – drums (born 1983 in Salzburg, Austria)
graduated with multiple certificates of merit from Anton Bruckner University in Linz, Austria. Has played in workshops and concerts with such musicians as T.M. Stevens, and multi-percussionist Martin Grubinger Jun.