Jan Lundgren
The Ystad Concert - A Tribute to Jan Johansson 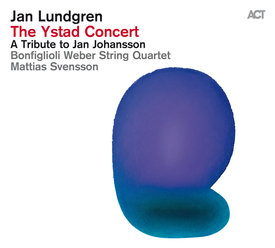 Ystad: idyllic coastal town in Sweden, home to the “Wallander” TV series and enclave of superb jazz. Since 2010, the Ystad Sweden Jazz Festival has been presenting top international stars and outstanding music projects, in a program compiled with unerring good taste by the Artistic Director, pianist Jan Lundgren.

On 30 July 2015, he himself took to the festival stage together with bassist Mattias Svensson and the Bonfiglioli Weber String Quartet to pay tribute to one of the founding fathers of Swedish jazz music: pianist Jan Johansson (1931 - 1968). Alongside the recently deceased Bengt-Arne Wallin, Johansson set the direction for Swedish - yes even Scandinavian - jazz and how it is perceived in the rest of the world, with his recourse to the indigenous folk music. His duet recording from 1963 (with bassist Georg Riedel) “Jazz på svenska” was to become a timeless guiding light for this kind of Nordic improvisatory music.

Jan Lundgren is also rooted in the Johansson tradition: Nordic Vemod and impressionist spirit embedded in the American jazz piano tradition combine to make his personal style. He too has already worked through the Swedish folk music genre. With “Swedish Standards” Lundgren landed a surprise hit in 1997.

At “The Ystad Concert”, Lundgren once again shows himself to be a worthy successor of Jan Johansson, who breathes new and unfamiliar life into folk music classics. This music had never before been heard played this way by a string quartet.

Georg Riedel about the album:

I have played together with many fine jazz musicians during my long music career. One of those who has meant most for me is Jan Johansson. When we were recording “Jazz på svenska” in the 60’s I didn’t understand that this was a stroke of genius on Jan’s part. Was it even jazz music? There were no drums and no traditional “swing”. But Jan Johansson was far ahead of his time. He created a Scandinavian sound in his jazz music.

In the 60’s many “experts” were critical to this project. Was there even any point to releasing a record? The audience thought differently. It became Sweden’s bestselling jazz record of all time.

Today the distinction between different music genres isn’t as clear as it was when I began to play in the 50’s and 60’s. The awe and respect for Jan Johansson is also no longer an obstacle for today’s musicians to preserve his legacy and approach Jan’s interpretations of Swedish folklore.

A very worthy representative of Swedish piano jazz is Jan Lundgren. He even dares to play the same notes as Jan Johansson, and still it sounds different. You immediately hear that it is Jan Lundgren and not Jan Johansson. That is how it was with Johansson as well. A few notes and you could hear who was playing.

The use of a string quartet is also entirely in the spirit of Jan Johansson. Crossing boundaries was natural to him. The Russian (“Jazz på ryska”) and Hungarian (“Jazz på Ungerska”) recordings aren’t as iconic as “Jazz på svenska”. This is why Jan Lundgren’s rendition becomes more independent of the original. A natural progressing in Jan Johansson’s spirit. It’s wonderful that this music has gained new life!