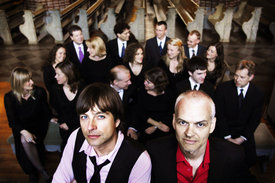 The exploration of new territory, and the avoidance of stifling conventions have always counted among Swedish pianist Jan Lundgren’s trademarks. Few European jazz musicians have searched the Great American Songbook as thoroughly for relationships pertinent to their own lives as Lundgren did in the early 90’s, while still studying at the Malmö College of Music, and in the early years of his career. Soon after, he immersed himself deeply in the roots of Scandinavia’s rich folk heritage, a move that made him a star at home with his 1997 release “Swedish Standards”.

Instead of resting on his laurels, Lundgren explored the universe of Duke Ellington and Billy Strayhorn’s music, before he assigned himself lessons in chamber-jazz, without eschewing the role of the sideman. Lundgren's recent ACT release Mare Nostrum (ACT 9466-2) can be seen as the pinnacle of these wanderings, during which his natural melodic style is congenially enhanced by the Mediterranean soundscapes of Paolo Fresu and Richard Galliano.

Restless as ever, Lundgren immediately rushed to apply himself to new challenges. Magnum Mysterium, possibly his most ambitious project to date, is the 41 year-old’s take on classical music. European renaissance sacred music by Orlando di Lasso and Claudio Monteverdi through to Cristobal de Morales and William Byrd supply the template for an impressive collaboration with Gustaf Sjökvist and his chamber choir – suitably recorded in the “Storkyrkan”, Stockholm’s cathedral during its unique evening mood.

Sjökvist, one of Sweden’s most respected choral directors who amongst other engagements has been a long-standing guest conductor of the choir of the Bayerischer Rundfunk, was the natural choice for this project, not only because he and the pianist have been acquainted for a long time: Sjökvist is distinguished by a scope and breadth of subject in his own field comparable to Lundgren’s in jazz. His repertoire extends from baroque to contemporary music, right up to premieres of works by modern composers like his compatriot Jennefelt. Just as notable is his experience in using unusual ensemble combinations like choir and guitar.

On Magnum Mysterium, the solemn original vocal passages delivered by Sjökvist’s fantastic singers, form the backdrop for Lundgren to open up new pathways within the stately madrigals. A few blue notes here, a world music embellishment or different choice of harmony there, suffice. Lundgren, it turns out, is a master of economy – as a player and as the arranger of most of the pieces on the CD. The arrangements are the key to the fascinating combination of strict form and an improviser’s freedom: while remaining uncluttered and minimalist in nature, they still manage to absorb the moods and colours of the originals, thus presenting a startlingly contemporary version of this open-minded yet at the core joyously festive ancient music.

This ease, eloquence and variability of this recording, is one trait that distinguishes it from “Officium”, the not less impressive, yet somewhat monolithic work by Jan Garbarek and the Hilliard Ensemble, that instantly comes to mind when one thinks of the musical subject matter and the ensemble line-up of Magnum Mysterium. Furthermore, the inclusion of bassist and ACT artist Lars Danielsson demonstrates the marked difference in approach on this new recording: Danielsson who once again proves himself to be one of the most innovative and intelligent of the contemporary bassists, introduces the musical language of the 21st century through his subtle use of loops and electronic effects. And all the while we are ready for the next surprise Jan Lundgren has to offer!