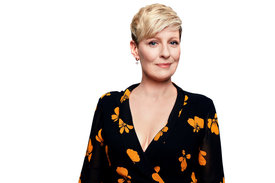 Ida Sand was born in 1977 into a very musical family in Stockholm. Her family roots lie in Piteå, a town in the far north of Sweden.

Ida’s father was a well-known opera singer who sang at the Stockholm Opera for 30 years, her mother is still an active church musician. Both parents were a strong inspiration for young Ida.

She started playing the cello at age 8 but the instrument did not leave much of an impression. Instead, Ida spent more and more time at the piano, singing along while tinkling the keys for hours. She did not let her mum teach her, she wanted to learn for herself and so she did.

At 16, Ida went to study at the music gymnasium in Stockholm and two years later, she went on to the Academy of Music in Gothenburg, where she immersed herself in the city’s lively jazz scene.

Since Ida started her career as a freelance singer and keyboard player, she has worked with the cream of the crop of the music scene in Sweden: Christian Waltz, Stephen Simmonds, Carola, Lisa Nilsson, Eric Gadd, Bo Kaspers, Jerry Williams, Uno Svenningsson, Jennifer Brown and Nils Landgren, to mention a few.

In spring 2007 Ida’s debut album Meet Me Around Midnight (ACT 9716-2) was released and critics and music lovers felt confident. “Ida Sand sings with power and she is the most soulful white female singer to come along in some time”, said JAZZ PODIUM.

Ida’s second album True Love (ACT 9481-2) was released in 2009. It takes on an even more personal sound than her previous work – one reason for this is that in the interim period Sand has become the mother of a baby girl. True Love is produced by her husband, the guitar player Ola Gustafsson. At the album’s core are five outstanding original compositions, framed by classics from a variety of genres – a very personal declaration of love to her family, the music, and the world

With her third album “The Gospel Truth” (ACT 9725-2), released in September 2011, Ida Sand fulfils a long harboured dream: to unite her three great musical influences – jazz, gospel and soul – with her own personal signature. The album was produced by Nils Landgren who is also involved as a musical guest as is guitarist Raul Midón, singer Rigmor Gustafsson, saxophonist Magnus Lindgren and guitarist and Ida Sand’s husband Ola Gustafsson.