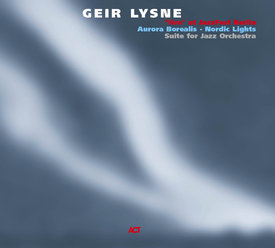 "Breath-taking", the "biggest surprise" of the five-day festival, "a discovery, very original, very exciting". Although the daily press and music journals are seldom in agreement, in this case they were united in their opinion. They heaped praise upon a big band that was up to that point virtually unknown outside their Norwegian homeland.

Under the direction of the Swedish trombonist Nils Landgren, the legendary Berlin Jazz Festival’s 2001 programme successfully celebrated a new departure with a Scandinavian focus. One particularly unwieldy-sounding name stood out from the rest: The Geir Lysne Listening Ensemble. One reason for the prominence of saxophonist Geir Lysne’s 20-piece jazz orchestra’s was that it is just as musically unorthodox and enigmatic as its name. But the band’s music has a decided advantage: it sticks in the ear much better than its name.

After 100 years of jazz and approximately 75 years of big band tradition Lysne’s band comes out with a finished, completely unusual, fresh, brand new sound. And this is not just in relation to the elephantine herds of American big bands, which are too often ensnared in a mesh of standards, something which also holds true for many independent European examples. The line-up, which includes two percussion players, electric bass, electric guitar, piano, and three flutes, provides for a unique mix of tonal textures.

But that alone is not what has caused the sensation that lies behind this band. Bandleader Geir Lysne writes extremely complex compositions that are nevertheless filled with a tremendous sensuousness - compositions that have developed into a distinctive individual style, a style that expertly draws out the potential of his different soloists.

No stylistic or tonal model imposes itself on the music - and one doesn’t miss such a model. Two of the critics in Germany’s leading dailies describe it well.  It is, as Werner Burkhardt writes in Munich’s "Süddeutsche Zeitung", Lysne’s big band "in no way, shape, or form copies or imitates. Even at its most forceful surging moments, the band has an austere quality - endearingly eccentric.  When you try to follow the rhythms in five and seven, however, it can sometimes make you a bit seasick." And in the "Frankfurter Allgemeine Zeitung" Ulrich Olshausen lauded, "Big band jazz of a sweepingly new sort...(played) with a precision that makes the complexity of Lysne’s scores seem breezy and feather-light. Intricate rhythms, hymn-like themes engraved in counterpoint, wild block chords, and small free passages flow together with a violent dynamism."

Since their appearance at the Berlin Jazz Festival the word is out among jazz cognoscenti that this big band is one of the most interesting in Europe. With the band’s technical virtuosity, theirs is a play of extraordinarily defined contours leading the way through an amazing variety of soundscapes. Soundscapes? It is the perfect image: Lysne’s pieces can be experienced as a drive through known and unknown landscapes continually reflected in a new light. Here you have the recording of the band’s celebrated Berlin festival performance.

It is a suite in five sweeping movements, full of exciting contrast, yet self-contained. Dedicated to the Northern Lights, it offers an aural adventure with the knowledge that people who have no previous predilection towards big bands can enjoy it. The ideal represented here is not "faster, higher, farther”; rather it is in the direction of more colourful, more surprising, more innovative.

Big band music for those who love adventures in sound - this big band is a "Listening Ensemble" in a double sense: one, because they themselves use their ears; the other because the public has the desire to "eavesdrop" on what the band has to say. As was said. "...very original, very exciting...". And also absolutely worth discovering for yourself!